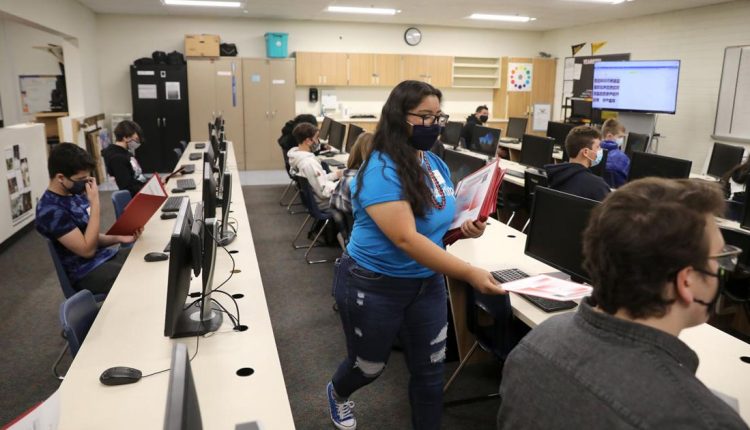 Flagstaff Unified School District’s (FUSD) board members received an update on the restorative practices program, which is in its first year of implementation with an initial cohort of nine schools.

Restorative practices, according to Rochelle Bronson, the district’s restorative practice coordinator, are the first step in response to building community circles, with the primary difference from a more traditional method being “less retributive vocabulary that is used in the classroom.”

“Back in the day when I taught and when I went to school, it was more like what are the rules and what rule did you break, and who should be punished for this?” she said. “Where restorative is more about what harm was done, how do we repair that harm and who is responsible for repairing that harm?”

Several restorative practices have been happening at the initial cohort of schools on a regular basis, Bronson said, including peace corners and rooms (a place for students to reset and calm down as needed), restorative conferencing and mediation, reintegration (practices to help a student who has spent time away from school feel included) and a variety of circles (a kind of communication tool).

A visit from Restorative Solutions, the district’s consultant company for the project, led to a finding that “FUSD is really implementing the strategies of restorative practice,” Bronson said.

“You can see it, you can feel it, you can hear it in your schools,” she said. “They’ve also noticed a really strong shift in the camaraderie among our staff that’s happening and the relationships that are being built between our leaders, our teachers and our students.”

She added: “There are a lot of students saying, ‘Our teachers really care about us.’ It’s really great to hear.”

Two employees involved in bringing restorative practices to their individual schools spoke about their experiences as part of the presentation.

Sechrist Elementary school counselor Kat McFarland said she “couldn’t resist” talking about restorative practice. She’s used them for 10 years, she said, but not in a school setting, and added that an assessment of professional development opportunities at Sechrist found that the one on restorative practice was one of the most popular.

“It’s becoming part of our culture, and the kids and students and staff and teachers are being very receptive,” she said. “…We all have upsets in our lives, and through the restorative practice we’re teaching our students how to resolve them.”

She said she had seen the practices used teacher to teacher, student to student and in a number of other configurations for problem solving and conflict resolution.

“We’re restoring relationships, we’re creating community, we’re creating healthy dialogue, and then it becomes less conflict, because our students are learning this language and communicating,” McFarland said of the effects restorative practices can have. “It takes time to invest right now because for Sechrist, this was the first year.”

She began by acknowledging the work that teachers and administration had put into adding restorative practices to the school.

CHS has had monthly dialogues on restorative practices throughout the school year, where staff can come by to discuss implementation and hear presentations. They’ve also begun using circles at department meetings during the spring semester.

“They’re starting to see not only is this beneficial with students, this is beneficial with each other and some of them have said, ‘I try this at home with my husband or wife or my own kids,’ so they’re really excited and motivated to work on this. We’re hoping to just be learning, trying out strategies, helping students build those relationships, meeting all of our expectations and standards to go out to the world and listen,” she said.

This method won’t always work, Bronson noted, and the traditional ways of handling problems will still be available as they’re needed. The largest differences are in the first tier of intervention — which happens in the classroom. Certain tier-three behaviors (for example alcohol or weapons on campus) require more typical consequences, although reintegration practices could be used to help them after, for example, a suspension.

“Restorative practice does not take away all the problems that are actually happening. There still is that accountability that takes place, but it’s just done with that ability to repair the harm, once the harm has been done,” Bronson said. “…One of the keys with restorative practices is also ‘communication is behavior.’ If we can get to the root cause of things, we can actually start understanding students more, understanding adults more and we will be more of a restorative community.”

The traditional discipline matrices are available on the district’s website.

Cathy Cox, FUSD’s director of student support services, said the district expected to have the new discipline matrix that will include restorative practiced finished by early May and in use by the start of the next school year.

It can be difficult to determine the effects restorative practices have had at FUSD so far, in part because data collection has not fully begun — it’s planned for the program’s third year — and in part due to the effects of the pandemic.

Remote learning, masking and conflicts in homes or community all affect student’s behavior, Bronson said, potentially throwing off the baseline.

“I can see the shift that’s starting to happen,” she said. “…It’s hard to see the exact change right now, but I do think we’ll see more of it as we continue without masks and being in-person a little bit more.”

Rosensweet said she had seen fewer students repeatedly needing tier-two intervention or higher after CHS’s approach to intervention had been restructured this year.

Some next steps for the program included creating a website explaining the district’s restorative practice, a district-wide survey and training certified staff over the summer. A number of training courses for administration and staff as well as family webinars are scheduled in the coming months.

The plan is to add them to the other district schools eventually.