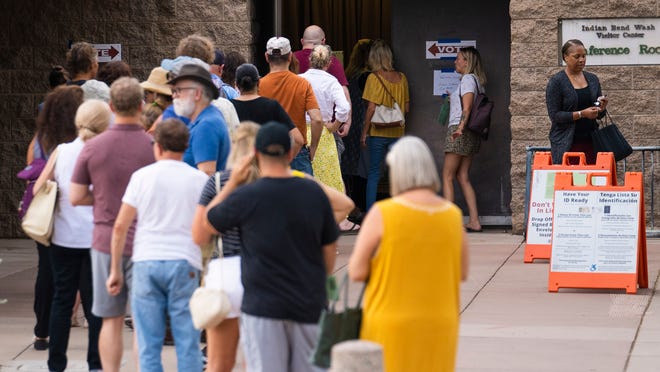 Results are in for key races across metro Phoenix

More than 100 candidates are vying for city offices across metro Phoenix in Tuesday’s election and tallies for the first tranche of early ballots have been released, giving residents an indication of who might emerge victorious in their community when all is said and done.

Kevin Hartke has a massive lead over Ruth Jones in the Chandler’s first competitive mayoral race in 16 years, and the sitting mayor of Goodyear — who was appointed after longtime leader Georgia Lord died — has taken the lion’s share of votes in his race.

The early, unofficial results in competitive council races across 12 Valley cities also offer a glimpse into who might represent voters on issues such as road repair and transit, housing affordability, and the looming water shortage — which Valley officials have said can only be successfully tackled through a coordinated regional effort.

Some local candidates who receive the majority of votes in their races may win outright once all of the ballots are counted. Others are likely to head to a runoff between the top vote-getters in November.

Only three area cities didn’t hold elections this month: Phoenix and Tempe follow different voting cycles than other communities in the Valley, and Peoria rules required just one election in November.

Outcomes in 4 of the Valley’s largest cities

Municipalities that represent nearly a fifth of the state’s population — Mesa, Chandler, Gilbert and Scottsdale — all have competitive races this year. Each has a six-person council with the mayor as a seventh voting member.

Mesa has three open City Council seats, about half of its governing body, but just two of the elections are competitive because attorney Alicia Goforth is running unopposed in District 5. She will replace Councilmember David Luna, who hit Mesa’s two-term limit.

The early results show Vice Mayor Jenn Duff, Mesa’s only incumbent on this year’s ballot, is up big in her District 4 race against challengers Trista Guzman Glover and Nathaniel Ross.

In District 6, US Airforce veteran Scott Somers is winning by a smaller margin against newcomer Darla Trendler. Both are vying to replace Councilmember Kevin Thompson, who’s running for a spot on the Arizona Corporation Commission.

The candidates who come out on top will take the reins at a critical time for the state’s third largest city: Mesa, like some other communities, recently enacted the first phase of water usage cutbacks, for example, and the city is making a big push to grow its employment base.

The six City Council candidates are in comparatively close races for Chandler’s three open seats. Council incumbent Matt Orlando is leading the pack, while Jane Poston and Angel Encinas are the next two highest vote-getters.

Scott September, appointed to the council in 2020, has received the fifth highest number of votes so far, which may spell trouble for him as the race includes only four open seats.

The winners will comprise the majority of Gilbert’s leadership and will contend with infrastructure, growth and quality-of-life issues as the nation’s largest town of about 270,000 residents approaches buildout.

Scottsdale incumbents Kathy Littlefield and Solange Whitehead have racked-up the most ballots so far in that City Council election, which includes a total of seven candidates vying for three open positions. Candidate Barry Graham has the next largest share of early votes.

Scottsdale’s winners will be tasked with adopting newly available policies around short-term rentals — an issue that’s long been a thorn in the side of Scottsdale residents — and addressing a housing shortage that’s the worst in the Valley.

Carefree and Cave Creek — towns of fewer than 5,000 people — send their entire councils to the ballot every two years, meaning their leadership could completely change this election cycle.

Cave Creek Councilmember Bob Morris is leading his opponent, Eileen Wright, in their bid to replace Mayor Ernie Bunch, who said he became disillusioned with the top role and is instead running for Town Council against 11 other candidates.

Incumbents Kathryn Royer and Thomas McGuire have received the most votes of any candidate. Newcomers Tom Augherton, Paul Eelkema, Anna Marsolo and Dusty Rhoades are Cave Creek’s other top vote-getters.

Carefree Mayor Les Peterson is stepping away after four terms, and Councilmember John Crane is leading in the race to fill that seat against challenger Peter Sample.

Shiela Amoroso, a challenger in Carefree’s Town Council race, is leading the vote tally. The five council incumbents in that race are trailing closely behind.

In Fountain Hills, a town of nearly 25,000 residents in the northeast Valley, 90-year-old challenger Joe Arpaio is trailing Mayor Ginny Dickey, who has been in office since 2018.

Arpaio was convicted of criminal contempt of court for ignoring orders to stop racial profiling at MCSO, but was later pardoned by then-President Donald Trump. He lost his bids for sheriff in 2016, for US Senate in 2018 and for sheriff again in 2020.