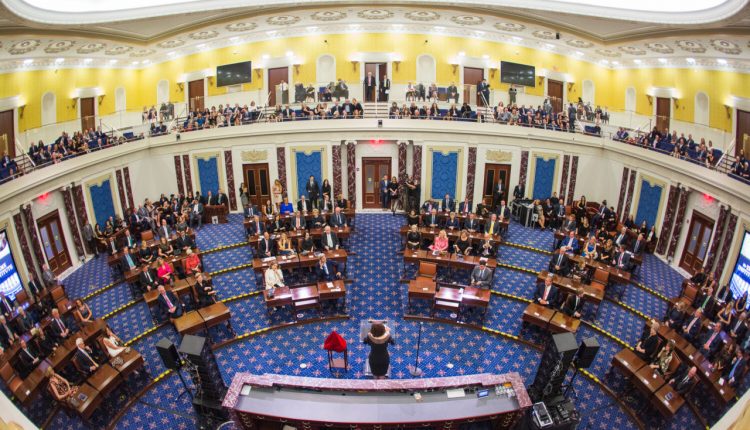 Revised voting rights bill rolled out in U.S. Senate, with Manchin on board

WASHINGTON — Senate Democrats on Tuesday unveiled a revamped voting rights bill that would expand voter registration as well as create nonpartisan redistricting committees, but the measure is still likely to face an uphill battle in an evenly divided Senate.

Senate Majority Leader Chuck Schumer said he will bring the legislation to the floor of the Senate “as soon as next week,” but supporters will need the backing of 10 Republicans to advance beyond a GOP filibuster.

The 592-page bill, spearheaded by Sen. Amy Klobuchar, the Minnesota Democrat who chairs the Senate Rules Committee, is the product of months-long negotiations with moderate Sen. Joe Manchin III (D-W.Va.).

Manchin wavered on an earlier package of sweeping elections reforms and voting rights initiatives, the For the People Act, that passed the House in March but stalled in the Senate. This new version has been dubbed the Freedom to Vote Act.

“I applaud Senator Manchin for his work here,” Schumer said. “He has always said that he wants to try and bring Republicans on, and now, with the support of Democrats and this compromise bill — which Senator Manchin had great input into — he can go forward in that regard.”

Klobuchar said in a statement that the freedom to vote is fundamental.

“With the Freedom to Vote Act, the entire voting rights working group, including Senators Manchin and Merkley, is united behind legislation that will set basic national standards to make sure all Americans can cast their ballots in the way that works best for them, regardless of what zip code they live in.”

If passed, the bill would designate Election Day a national holiday, along with enacting automatic voter registration for each state, so that all voters would have access to online voter registration, backers said.

The bill would also extend at least 15 days of early voting for federal elections. Many Republican-controlled states have passed voting- related legislation that limits early voting.

Klobuchar introduced the bill along with Democratic Sens. Tim Kaine of Virginia, Manchin, Jon Tester of Montana and Raphael Warnock of Georgia.

“As access to the ballot remains under threat for voters in Georgia and states across the nation, I’m proud to stand with my colleagues to introduce the Freedom to Vote Act that will protect the sacred right to vote for every eligible American, no matter where they live, and enact commonsense democracy reforms that will help ensure our government remains by and for the people,” Warnock said in a statement.

Georgia Sens. Warnock and Jon Ossoff have been vocal about protecting voting rights, particularly after Georgia Gov. Brian Kemp signed a restrictive voting bill that would limit early voting and drop box locations. Georgia also placed a ban on giving away water or food to voters within a certain distance of voters or from polling sites. Poll workers are allowed to set up water, but are not required to do so.

An investigation by ProPublica and Georgia Public Broadcasting found that Black voters sometimes waited in lines for hours compared to white voters as the number of polling places were reduced in primarily Black neighborhoods.

Ossoff pushed for a provision in the bill to “protect voters’ access to water when they are made to wait in line outside polling places,” according to his office.

“Too many Americans bled and died for voting rights to give up this fight,” he said in a statement.

The legislation would also make sure that every state offers same-day voter registration at a limited number of locations for the 2022 elections and at all polling locations by 2024. That time frame is to allow rural areas time to implement those new requirements.

“This bill will allow us to maintain local control over our voting systems while keeping our elections safe in the face of new and evolving threats, shine a light on dark money in politics, and close loopholes that allow foreign spending on elections,” Tester said in a statement.

The bill would also require states to follow non-partisan congressional redistricting criteria and allow states to choose how to develop those plans, such as by having an independent redistricting commission.

States would be prohibited from using “a redistricting plan to conduct an election that, when considered on a statewide basis, has been drawn with the intent or has the effect of materially favoring or disfavoring any political party,” according to the bill text. Many states now are in the process of drawing new district maps.

Schumer said that the legislation is necessary to help fight the onslaught of restrictive voting laws passed in Republican-controlled states.

“A few weeks ago, the governor of Texas signed one of the most sweeping voter suppression bills in the entire country,” he said. “It comes on the heels of other restrictions sprouting across the country—from ending election-day registration in Montana, limiting after-hours drop boxes in Florida, even making it a crime to give food and water to voters at the polls in Georgia.”

As of July, Republican-controlled states have passed 30 restrictive voting laws in 18 states, according to the Brennan Center for Justice.

State Republican lawmakers have introduced more than 400 restrictive voting bills in 49 states. But state Democrats have also pushed back and have passed 54 laws with expansive voting rights provisions in 25 states, according to the Brennan Center.

The rash of restrictive voting laws passed by Republicans is in response to the 2020 presidential election, in which former President Donald Trump has repeated the lie that the election was stolen from him. His backers stormed the U.S. Capitol on Jan. 6.

“I’ve lived through a violent attack on the Capitol by people wanting to overturn an election,” Kaine said in a statement. “And I am watching state legislatures scheme to reduce people’s ability to vote.”