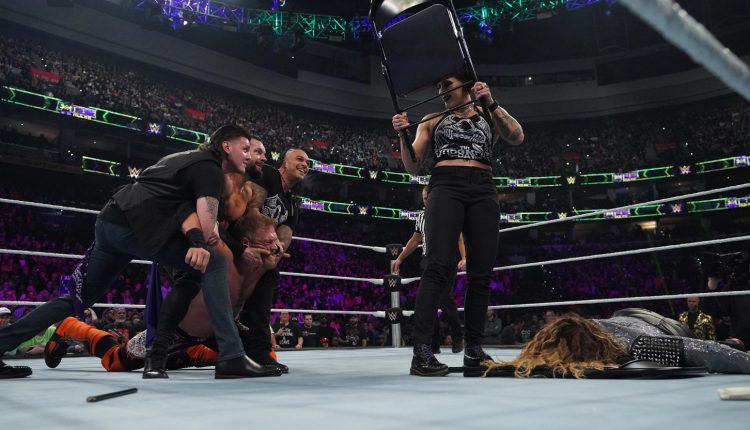 Rhea Ripley played a huge role in the finish of the Edge-Finn Balor match at Extreme with the powerful Australian attacking Edge’s wife in the closing moments.

The rivalry between Edge and The Judgment Day’s Finn Balor, Damian Priest, Rhea Ripley and Dominik Mysterio has been going for several months. Edge created the group with Priest in April at WrestleMania 38 and within a few months, Edge was kicked out of the group.

All of the issues between the two sides led to Balor facing Edge in a singles match for the first time at Extreme Rules on October 8th. It wasn’t just any match because the two men agreed to settle things in an “I Quit” Match.

After nearly 30 minutes of action, Balor was able to get Edge to say because Edge’s Hall of Fame wife Beth Phoenix was there to try to help her husband. However, the numbers game became too much with Ripley punching Phoenix while having brass knuckles on her hand.

When Ripley threatened to do a Conchairto chair attack, Edge said “I Quit” to give Balor to win. After Edge quit, Ripley still hit Phoenix anyway because that’s what bad people do. Edge was furious about it as he checked on his wife while Ripley celebrated with her friends in The Judgment Day group.

Ripley tweeted about what she did to Phoenix and pointed the finger at Edge for teaching The Judgment Day how to act in a situation like that.

“YOU @EdgeRatedR were the one that taught us to NEVER hold back.”

YOU @EdgeRatedR were the one that taught us to NEVER hold back. ⚖️#TheJudgmentDay#ExtremeRuleshttps://t.co/NQwfqhEWtG

“@EdgeRatedR YOU named me the ERADICATOR, so that’s what I became… But before you I was always The NIGHTMARE. Sweet “dreams” @TheBethPhoenix”

@EdgeRatedR YOU named me the ERADICATOR, so that’s what I became… But before you I was always The NIGHTMARE.
Sweet “dreams” @TheBethPhoenix 👹⚖️#TheJudgmentDay#ExtremeRulespic.twitter.com/N0iVQn1Hij

Since Ripley attacked Phoenix in such a brutal, it is possible that WWE will do a Ripley vs. Phoenix match or perhaps Ripley & Balor against Edge & Phoenix in mixed tag team action.

In other news regarding the Edge-Balor match, Balor also had a unique look on his way to the ring.