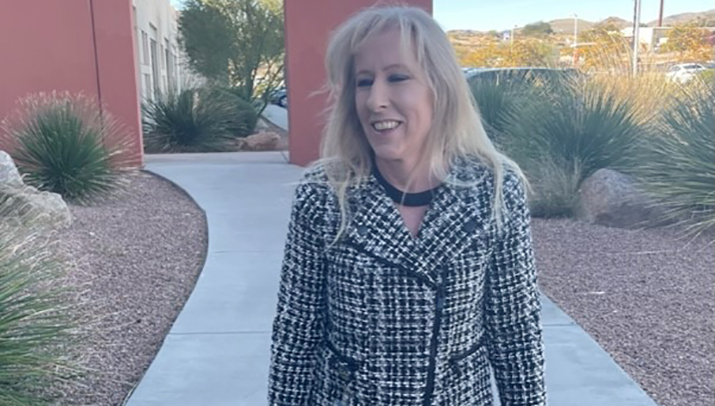 KINGMAN – Although she’s worked for the county for quite some time, Mohave County Public Fiduciary Rhonda Mayo has only been in this critical leadership position for a little over a month. A native of small town Cloquet, Minnesota, she knew since childhood that she would someday migrate to the southwest after first learning about the region and its arid climate. Minnesota is certainly not known for its sunny and warm environment.

She took it slowly by moving to Flagstaff in 1992. It was warmer at times, but still too chilly for Mayo. Ah, a move to Golden Valley in 1995 did the trick while she worked in the casinos of Laughlin. Her mother soon followed and came to Kingman.

After a couple of years, not wanting to continue a career in the Laughlin casinos, and seeking a new adventure, Mayo moved to California, studied criminal justice and volunteered at the Riverside County Juvenile Hall. She decided a career in probation is what she wanted, earning her Associate Degree in Criminal Justice at Chaffey College in Rancho Cucamonga. She decided to move back to Mohave County, which her mom eagerly anticipated.

Mayo was offered a job as a corrections officer at the new prison in Golden Valley soon after it opened in 2004. She was soon promoted to case manager and GED instructor during her 10 years employment there. She also managed the successful dog obedience training program. While at the prison, she obtained her bachelor’s degree in criminal justice from Kaplan University. Then, she applied for Probation Officer for the Mohave County Probation Department and was hired in 2014. As she left her prison job, she joked with the inmates on her caseload. “After 10 years, I’m finally getting paroled.”

Mayo said “I loved my job with the Mohave County Probation Department. I planned on staying with the probation department through retirement, however, my better helped was never very comfortable with the situation.” In 2017, a friend told Mayo that a case specialist position in the county Public Fiduciary Office had opened. She applied what was offered the position, and began working under county fiduciary Carole Collins. After the retirement of Collins, Mayo was deemed highly suitable as her replacement.

Many may not even know the important role of a public fiduciary. Mayo defines it as someone who meets “the need in our community to provide guardianships for incapacitated vulnerable adults, who either do not have any family, or any family members willing to fill the guardian role.” When that guardianship is required, the public fiduciary is responsible for managing the affairs of that incapacitated person, making all the medical and financial decisions. This fiduciary also advocates on behalf of the individual to ensure they receive their benefits and their needs are being met. The public fiduciary is then accountable to that individual and to the court, which has appointed the fiduciary as guardian.

Mayo is married to her husband Alfred, who works for the City of Kingman and they have a number of rescue animals as part of their lives – two dogs (Sabio and Rosie), two cats (Sophia and Lily) and a horse named Cookie – who has been part of the family for 16 years. Mayo loves riding on weekends. Her mom Karen and stepdad Jerry live nearby as well.

All in all, Mayo has continued to have a passion for justice. She says, “Without a public fiduciary, a vulnerable adult is at risk of not only being neglected, but exploitation remains a major risk. The public fiduciary is providing ‘justice’ and protection for their wards. Ensuring all needs are met, including physical, financial and mental health needs.”

Mayo plans on having more productive and rewarding years with the county before she retires.