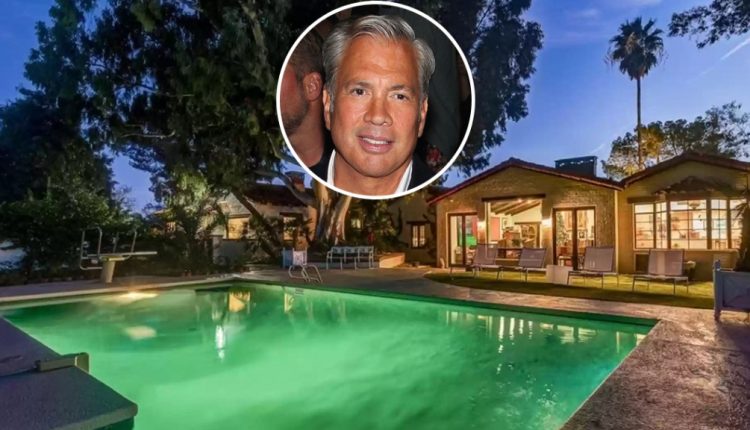 For a fashion magnate who co-founded the trend-setting Marc Jacobs label, known for three decades for its fashion-forward sartorial interpretations of pop culture trends and its use of celebrity muses in advertising campaigns, businessman Robert Duffy has remarkably traditional taste when it comes to real estate and interior décor, as evidenced by the buttoned-up Tucson, Ariz., retreat he now has on the market at $2.7 million.

Tax records show that Duffy, who orchestrated the brand’s 1997 investment by luxury conglomerate LVMH and stepped back from his role in the day-to-day running of the company around 2015, purchased the property not quite two years ago for $1.85 million and initially listed it earlier this year at $3 million.

Originally built in 1936 and extensively updated, the Santa Barbara-style hacienda is reminiscent of homes designed by locally renowned Swiss-born Tucson architect Josias Joesler. Hidden away on more than three private, oasis-like acres, the main house has five bedrooms and 3.5 bathrooms in about 4,000-square feet, while the almost 750-square-foot one-bed/one-bath guesthouse has its own kitchen, laundry, fireplace, private patio, and unfinished basement area.

Highlights of the simply appointed main house include a roomy step-down living room with a simple brick-trimmed fireplace and a vaulted and beamed ceiling, an equally spacious and voluminous family room with a tiled wet bar, and an eat-in kitchen with up – up-to-date appliances. In addition to an airy bedroom and a large bathroom with claw-footed tub, the primary suite includes a room-sized walk-in closet and a private sitting room/office with floor-to-ceiling bookshelves.

Outside is where the property’s relaxed charm is most evident, from the great sprays of bougainvillea that tumble over courtyard walls, to the deep loggia for escaping the scorching sun, to the tree-shaded dining terrace with outdoor fireplace, to the heated swimming pool with its old-fashioned diving board.

Listings held by Marta Harvey at Russ Lyon Sotheby’s International Realty show there have been numerous important improvements over the last several years, among them an overhaul of the kitchen, a new HVAC system, a new gate and security system, and a rebuilt roof deck .

The Tucson residence is just one of the many homes Duffy has owned, from New York to Arizona to Savannah to Paris, several of which have been featured in top shelter publications, and some that were sold to other notable individuals. The real estate aficionado, whose current holdings include a duplex maisonette in a stiff-lipped apartment house in New York’s Sutton Place, sold another house in Tucson earlier this year for almost twice the $990,000 he paid three years earlier, and in 2018 he took in $6.8 million on the sale of a historic and unique riverfront residence in Rhinebeck, NY, that had once been the tea house on the Astor family’s Ferncliff Farm. Duffy and his husband, real estate agent Connor Dodd, celebrated their marriage on the property, during which Miley Cyrus gave an impromptu performance.

Back in 2013 Duffy sold a stunningly remodeled oceanfront home in Provincetown, Mass., to television titan Ryan Murphy. And among the several expertly renovated townhouses in Manhattan’s West Village he’s bought, decorated and sold over the years, including two on the same block, is one that was featured in Architectural Digest and another that was sold in 2017 for $9.5 million, far below it’s initial ask of $17 million, to California Baby founder and CEO Jessica Iclisoy.