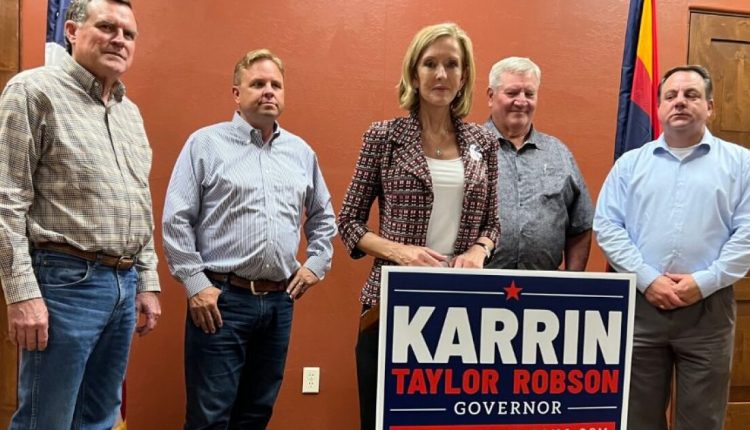 Some elected officials and agricultural leaders came together late Thursday afternoon to lend their support to Karrin Taylor Robson’s campaign for Arizona governor.

“I know of her work ethics; I know of her commitment as a native Arizonan,” said Yuma County Supervisor Jonathan Lines.

But she told KAWC the agriculture community is key.

“It also signals to me the opportunity to really work with and engage with the leadership of the ag community in Arizona,” said Robson.

And few things are as important to the ag community as water.

“We’re facing a crisis in Arizona in our water, and the importance of the ag industry here in Yuma is not just important to Arizona economically, it’s important to the country,” she said.

Robson says that makes Yuma County’s farms important to her.

“The fact that they’ve placed their trust in me means a lot,” she said.

The Phoenix area businesswoman has also impressed those outside of ag.

She picked up Yuma Mayor Doug Nicholls’ endorsement as well.

Nicholls said he finds her approach to the campaign refreshing.

Those who formally endorsed Robson on Friday include:

Robson is one of four candidates competing on the Republican ticket for governor in the Aug. 2nd primary election.