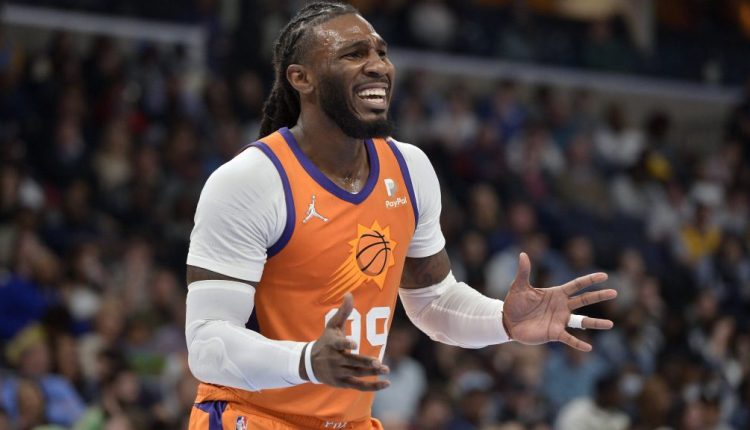 The ongoing standoff between the Phoenix Suns and disgruntled veteran Jae Crowder could be nearing a conclusion, per Eric Pincus of Bleacher Report. In a story published Wednesday, he writes:

The Suns have several suitors, including the Milwaukee Bucks, Atlanta Hawks and Golden State Warriors. One executive told B/R that the final result could be a multi-team trade with three, four or even five NBA franchises.

“The Houston Rockets may be the key to a Crowder deal (along with Dario Šarić), with Kenyon Martin Jr. and Eric Gordon the potential return for Phoenix,” Pincus adds in the column.

“The Rockets would want real value back, with it quality young prospects and/or draft considerations.”

Gordon, who turns 34 later this year, makes perfect sense as a veteran defender and floor spacer alongside the likes of Chris Paul and Devin Booker in Phoenix. He’s also a bit old for the current rebuild with the Rockets in Houston, and his salary fits almost perfectly with the combination of Crowder and Saric, for trade matching purposes.

Martin, 21, makes less sense for Houston to trade, but he’s also not a star — so he’s likely not off the table, entirely. He’s a free agent after the 2023-24 season, as well, so his peak trade value is probably this season, as opposed to waiting until he’s near free agency.

Latest @BleacherReport
How the Golden State Warriors Could Swing a Jae Crowder Deal – Or what would be enough, in addition to Crowder, for the Warriors to sacrifice some of their top prospects? https://t.co/iEWJ9pkRTl

The problem from a Houston perspective, however, is that a 32-year-old Jae Crowder doesn’t make sense for a rebuild, either. So, some other team would potentially in need of Crowder’s services — perhaps the defending NBA champion Warriors, off to a disappointing 8-10 start — send an asset to the Rockets that could be worthy of giving up Gordon and/or Martin in such a deal?

Pincus speculates that a prized Golden State prospect such as James Wiseman, Jonathan Kuminga, or Moses Moody — lottery picks in the 2020, 2021, and 2021 NBA drafts, respectively — could become an option, particularly if their slow start continues.

If that’s the case, is there a deal to be had in which the Rockets would give up Gordon and perhaps Martin for a member of that trio? It remains to be seen whether there’s serious interest from a Houston perspective, and only third-year general manager Rafael Stone knows the answer. But it’s worth keeping an eye on in the weeks and months ahead, as the NBA gears up for the upcoming trade season and the February 2023 deadline for deals in the 2022-23 season.