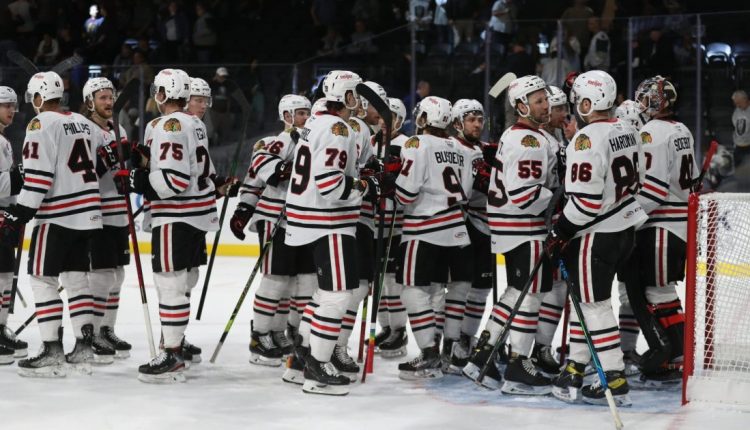 Forward Luke Reichelwho is currently with the Chicago Blackhawks, is tied for fifth among AHL rookies with 49 points (21G, 28A) and tied for fourth with 18 power-play points (5G, 13A).

defenseman Ian Mitchell is tied 16th among AHL bluliners with 32 points (10G, 22A) and tied for second with five power-play goals.

Forward Michael Teply is first among rookies and tied for second overall in the AHL with four shootout goals.

IceHogs Host Roadrunners on Wagon Wheel Cardinals Night and Pucks and Paws Night This Weekend at the BMO
The Rockford IceHogs are back home at BMO Harris Bank Center this weekend and host the Tucson Roadrunners on Saturday, Apr 9 at 6 pm on Wagon Wheel Cardinals Night presented by Insurance King and on Sunday, Apr 10 at 4 pm on Pucks and Paws Night presented by Riverside Dental.

Celebrate Stateline hockey history and our community frontline heroes on Saturday as the IceHogs become the historic Wagon Wheel Cardinals for an evening. Bid on your favorite players’ jersey after the contest with proceeds supporting the Greg Lindmark Foundation. Buy Tickets & Wagon Wheel Cardinals Information

Bring your furry family members to the game on Sunday for Pucks and Paws Night! Pets are free with the purchase of an adult ticket. Special seating is reserved for fans and their pets. The first 1,500 fans will receive an IceHogs dog collar presented by Riverside Dental Center. Buy Tickets & Pucks and Paws Night Information

Hogs Return Home after Successful Western Road Trip
The IceHogs are back at the BMO after going 3-1-0 over a busy four-game in five-day stretch out West at Tucson and Henderson. The IceHogs earned back-to-back wins at Tucson last Friday and Saturday (4-3 in overtime and 6-3) and split their Monday/Tuesday showdown in Henderson, Nevada (4-1 loss and 1-0 win). Forward Josiah Slavin had an incredible road trip, scoring three goals and three assists over the four games and enters Saturday’s game on a four-game point streak.

Slavin Finding Groove in Playoff Push
In addition to his four-game point streak, Slavin has been a key member of the team’s success in their postseason push. In his last eight contests, he has six goals and four assists for 10 points.

Soderblom Making his Mark in First Season
IceHog’s rookie goalie Arvid Soderblom has already claimed the team’s all-time rookie mark for shootout wins (4) and sets his sights on the wins record, trailing Collin Delia (2017-18 season) and Alec Richards (2010-11) by a single victory. Earning his second shutout of the season on Tuesday at Henderson, Soderblom is now tied with Richards for the most shutouts by an IceHogs rookie goalie. With a save percentage of .918, he is currently ahead of Antti Raanta’s record of .914 set back in 2013-14 with 11 games remaining.

Meijer First Goal Fundraiser
When the IceHogs score the first goal of each game this season, Meijer will donate $50 to Rock House Kids, a 501(c)(3) foundation helping feed Rockford’s inner-city youth in a safe nurturing environment. This season’s donation to Rock House Kids is currently $1,350!