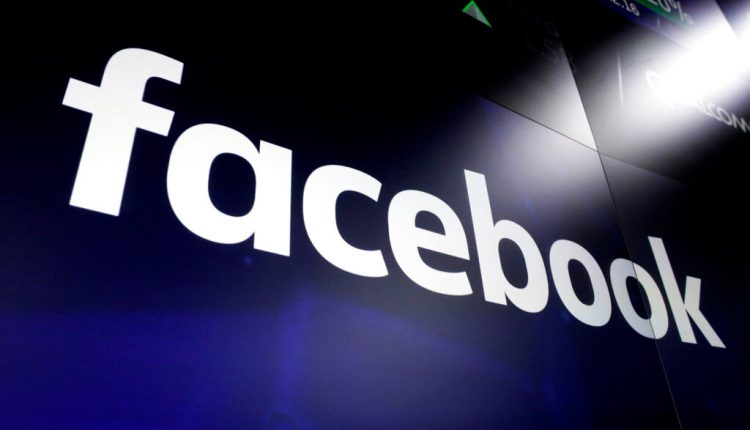 Rockingham County Republicans attack each other about posts on Facebook page

REIDSVILLE, NC (WGHP) — A concern about personal attacks posted on a Facebook page has caused a festering divide among members of the Rockingham County Republican Party that included an argument at a recent public meeting after which one elected official found that tires on his truck were damaged.

Stay on top of breaking news and weather with the FOX8 mobile app.

That official is Rockingham County Commissioner Don Powell, who said he found the valve stems pulled out of two of the wheels on his pickup truck following a heated meeting of the Federated Men’s Group on Feb. 8 at the GOP headquarters on Piedmont Street.

Powell said the tire damage followed a loud discussion about a Facebook page called NC Patriot Project, which has contained derogatory comments about himself and other members of the Rockingham County GOP. He said when he and others have tried to respond to those posts, their own comments have been deleted and their access to the page blocked.

He did not say – although he did imply – who the administrator of the page is, but he said he actively is pursuing responsibility for comments that he said have accused him of business fraud, which could be libelous. Powell said Facebook has protected the identity of the administrators and made it extremely difficult to pursue legally. He has not given up. 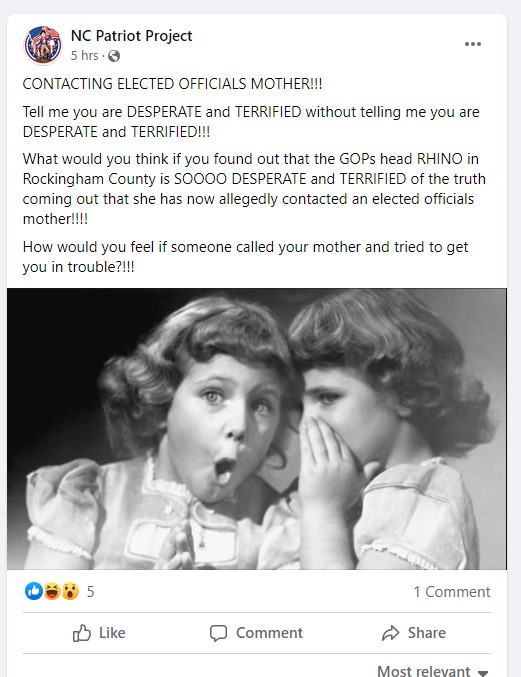 His concern about the Patriot NC posts came to a head during a meeting of the men’s group, which is a subset of the county GOP. Another county commissioner, Craig Travis, and Bernie Parnell, husband of Rockingham GOP Chair Diane Parnell, had a heated discussion about personal comments posted on the NC Patriot page, Powell and Diane Parnell said.

Powell said he believes Travis is connected to this page and the comments posted there. The page includes personal attacks about various Republicans, but it also has fewer than 500 “likes.”

Travis, who has served as a commissioner at various times since 2010 and was elected his chair in 2016, did not respond to voice messages left on his cell phone or to a list of questions sent by email to his county commission address.

But on Feb. 19, he did post extensive comments about the situation on his Facebook page to address his role in the NC Patriot Project page. He said adamantly that he is not part of that page, nor is he part of a political action committee that has been linked to the page.

“About a month ago, I was sent an invite to a Facebook page called NC Patriot Project,” Travis wrote in the post. “I looked at page and saw a dislike of [county commissioner] Kevin Berger and immediately shared the page to my page and liked the post and liked the page. No denying that.

“I even invited others to see the page. It was my hope to get more people to see that these elected officials are not good for this county due to their voting record which doesn’t reflect The Will of the People at the time. Granted it’s my opinion and I respect those that differ.

“Then I started getting texts and calls asking me if I had created the page. The answer to each person was a resounding NO. I did like page and shared posts and invited other to see page. I then heard that Diane Parnell (chairwoman of Rockingham County Republican Party) was telling people that it was my PAC (political action committee).”

He said that he doesn’t have a PAC, only a re-election committee and disavowed any role.

Powell said Travis left the meeting during the argument, and he later found his tires damaged and filed a police report. Powell said Travis told him he wasn’t responsible for the damage and that Travis had passed a voice stress test by the police to clear him in the incident.

The police report filed by the Reidsville Police Department said the incident was reported at 8:40 pm on Feb. 8 at 200 block of Piedmont Street. The report was redacted to remove the names of suspects. Attempts to reach the investigating officer, Capt. Brian Oakley, were unsuccessful.

“It’s not the crime of the century,” Powell said. “Other than laying out there in the street trying to get two tires on, I’m out 35 bucks. But at the end of the day, I’m the only one who lost something.”

Travis said he attended the meeting and that Bernie Parnell wanted to talk about the NC Patriot page.

“He described it as untruths and hurting the Republican candidates,” Travis wrote. “Mr. Parnell was very upset and was yellowing. He started calling other members cowards for not admitting they created the page. Then Mr. Powell start raging about not getting any support, and I told Mr. Powell that I never shared anything about him.

“Then Mr. Parnell started yelling again and asked me about the Facebook page and I stated that I had liked the page and shared some posts and invited others to view the page. Mr. Parnell called me a liar, so I stood up and started walking out (It upsets me to be called a liar). “

He said the argument escalated into an expletive-laced shouting match as he was leaving. “Then I walked out the door straight to my car and went home to discuss things with my wife and calm down,” he said.

Travis said he was contacted about the tires on Powell’s truck being damaged. He said he then sent a text to Powell to tell him he wasn’t responsible and offered to take a lie-detector test. He said he started to hear that Powell and Diane Parnell were telling people he was responsible.

“I probably received 30 calls asking me if I slashed Don’s tires,” Travis wrote.

He wrote that he talked to Oakley and was cleared by the voice test administered by the police department.

Powell said what more concerns him than the tires is the material posted on the NC Patriot page, which he sees as Republicans attacking Republicans. 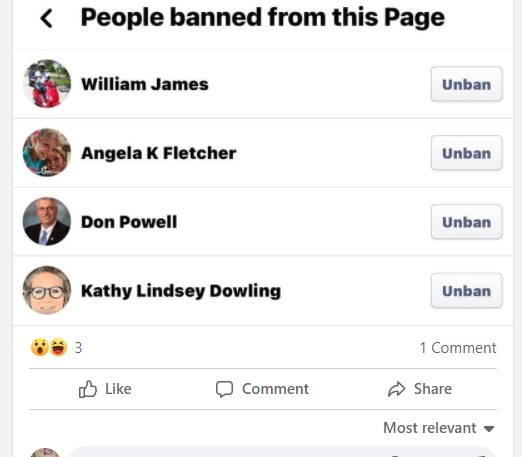 Don Powell shows as one of the people banned from the page. (NC PATRIOT PROJECT)

“My comments were: For five years I was vice chair of the party. I have spent an enormous amount of time and money on this party, attending commissioners’ meetings, school board meetings, Board of Elections meeting in this town and in Raleigh to take up for candidates.

“But when the post [accusing him of fraud] first appeared on Facebook, not one person stood up for me after I had stood up for them. It irritates me. I thought it was time to bring it up.

“Mr. Parnell got involved. His wife is party chair. Stuff has been put out about her.

“They can say anything on the page, and I can’t challenge it. When tried to respond, it was deleted, and I was blocked. There was a post on there that said, ‘If you try to take up for these scumbags, we are going to delete and block you.’

Diane Parnell said questions by her husband arose because of what she called “jealousy” and what she termed as unwarranted attacks on Senate Leader Phil Berger, who represents the county in Raleigh – making strong accusations about illegalities – and his son Kevin, who is a county commissioner, that appeared on the NC Patriot page. “They are jealous of him,” Parnell said. 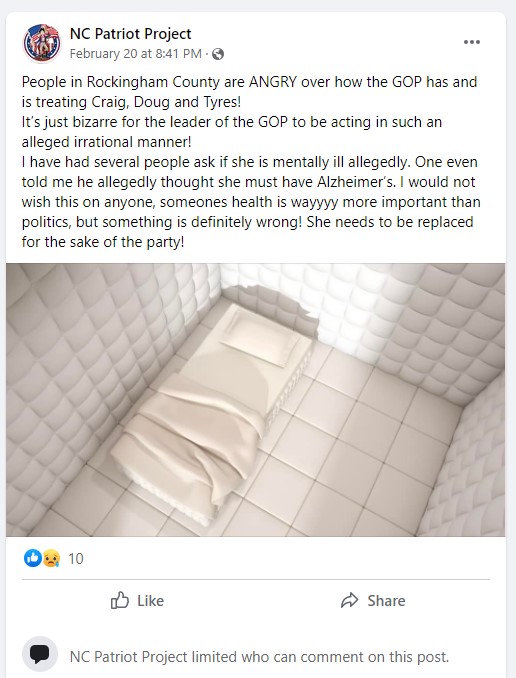 She, like Powell, talked about how hard Republicans had worked to turn the county “red” and said members of the executive committee – about 33 of 40 showed up for a recent meeting after the men’s group meeting – were incensed by these attacks and wanted those who might be part of it to be “chastised.” She called them “crazies” who are “not part of the inner workings of the party.”

Travis said he heard about the meeting and that he had been banned from the GOP building because of the argument about the Facebook page. He said he was expecting to receive a letter about the committee’s censorship.

“The Rockingham County Republican Party does not mind if people bash and shame other elected officials (like me) just you better not bash their favorites,” he wrote. “Its ok for other elected officials and party leaders to call you names but you better not call them names. The party now will tell you who you need to vote for and who to support. There will be no questions asked.

“You do not have freedom to make your own mind up unless given permission by the party. Don Powell said multiple times in the Tuesday meeting that we needed to come together ‘For the good of the party,’ and then on Thursday night I was told that he told the Executive Committee that ‘There is not Constitution here, ya’ll can do what you want.’

“Great leadership, we have here at Rockingham County Republican Party, huh? Guess they do want party to come together but minus those that do not agree with them.”

Parnell said she had been blocked from NC Patriot page but that she had people who monitored it and reported to her comments about her and the party. She also said she was pretty sure she knew who was behind it.

“I can tell you who these people are, but I can’t prove it,” she said. “I know them well enough to know their tone in speaking, their way of talking and posting.”

She also said the identities would be revealed and then “heaven help them.”

She said her daughter posted on the page to “defend her mother. A private email was sent to her to threaten her. That’s going too far. Say what they want, but leave your kids alone.”

Man detained, not arrested after fatal shooting in Phoenix