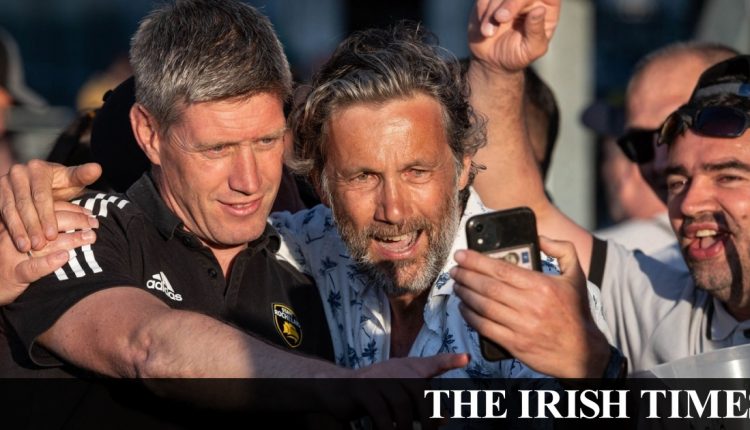 Irish interest in the second Heineken Champions Cup semi-final on Sunday will be all the more acute if Leinster have reached the final. As it is, it pits sometime Munster halfback partners and good friends Mike Prendergast and Ronan O’Gara against each other as Racing 92 attack coach and La Rochelle head coach.

It looks like being a close affair, with Racing sitting three places and just four points above La Rochelle in the table. O’Gara’s team have won nine of their last 11 games and are motivated by last season’s final loss to Toulouse at Twickenham. This includes a 19-0 win at home to Racing seven weeks ago, although since then the Parisians have won six matches in a row.

The match-up is sprinkled with stardust, with it the finishing of Teddy Thomas, the creativity of Finn Russell or the brilliance of Nolann Le Garrec for Racing, or for La Rochelle the power of Jonathan Danty, finishing of Raymond Rhule and ball-carrying of Uini Atonio, 37-year-old retiring ex-All Black Victor Vito and, of course, their heartbeat, Grégory Alldritt.

Racing 92’s Finn Russell and Rohan Janse van Rensburg of the Sale Sharks in action at their Champions Cup quarter-final match at La Défense Arena in Paris on May 8th. Photographer: Laszlo Geczo/Inpho

With Racing 92’s enclosed La Défense Arena hosting two Genesis concerts, this semi-final has been moved, curiously, 180 kilometers and a two-hour drive north to Lens. This seems designed to discourage La Rochelle fans from attending the game as much as anything, and, in what is a bad look for the tournament, the 38,058-capacity Stade Bollaert-Delelis – home to Ligue 1 club Lens – will be far from full .

“That is shameful and unacceptable,” ventured O’Gara. “I spare a thought for our supporters who must travel seven hours by road in order to support their team, because there are few flights to Lens. I know that because my wife tried to find one, but she failed. Setting that aside, I remain focused on the match this weekend which presents a great opportunity for us to pave the way to write a new page of history for the club and break new ground.”

Racing, one-point favourites, have won their three previous semi-finals and perhaps have more X-factor – witness six tries from counterattacks in their Euro campaign, but La Rochelle may just exercise more control over the 80 minutes.