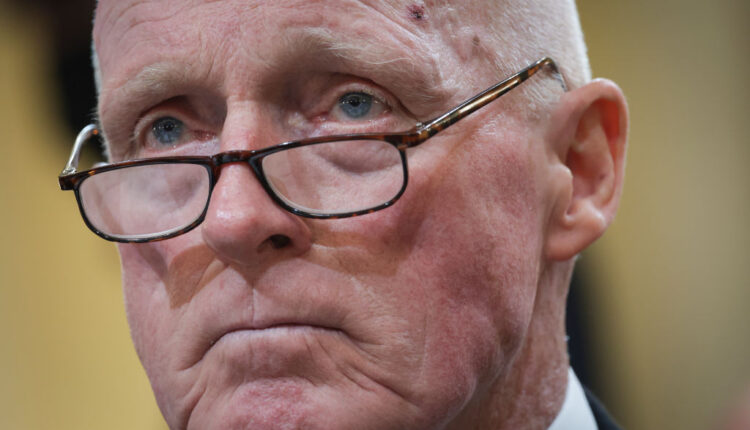 Mesa Republican and Arizona Speaker of the House Rusty Bowers detailed the pressure put on him by former President Donald Trump and his loyalists in an attempt to unconstitutionally change the state’s electors from Joe Biden in a newly released deposition transcript from the Congressional committee investigating the Jan. 6 insurrection.

“Rudy, you’re asking me to do something that is beyond anything I have ever heard or contemplated as a constitutional prerogative or choice that I might take,” Bowers recalled telling former New York Mayor Rudy Giuliani, who became Trump’s lead attorney following the 2020 election, in a phone call with Trump on the line.

The Nov. 22, 2020, phone call happened while Bowers was driving, the Bluetooth display on his car reading “White House,” he said during an interview with the U.S. House Select Committee to Investigate the January 6th Attack. The committee recently has released a slew of transcripts of depositions related to their investigation, including Bowers, who famously testified before Congress about the pressure campaign from Trump and his associates.

Giuliani came onto the phone first, saying Trump would be on shortly. When the president got on the line, the three exchanged pleasantries before Giuliani began telling Bowers about alleged evidence of fraud in the election the campaign had.

Bowers said he needed to see the evidence on his “desk” before acting, and Trump allegedly told Giuliani to “give the man what he wants.” But Bowers would never see any such proof.

“Not then and not a week later, not 2 weeks later, not now. Never,” Bowers said when asked if Giuliani ever provided evidence to his claims.

But Giuliani didn’t just want to talk about alleged evidence of fraud with Bowers on the call. He also asked Bowers if he would present this “evidence” in a formal hearing at the Arizona House of Representatives, and then use it as justification to call the legislature into special session and decertify the election results.

Bowers told Giuliani that the Arizona Legislature would need votes from Democrats in order to go into a special session — lawmakers can convene a special session with approval of two-thirds majorities in both the House of Representatives and the Senate — to which the former New York Mayor replied he wasn’t familiar with Arizona law, a refrain Bowers said he used frequently during their conversation.

A person “high up in Republican circles” in the legislature told Giuliani that Arizona law allowed for Bowers to call for the dismissal of the Biden electors to be replaced with the Trump electors if there was “sufficient enough cause,” Bowers said Giuliani told him in the phone call.

Shortly after the 2020 election, a group of Arizona Republicans, including Arizona GOP Chairwoman Kelli Ward, signed a false document that sent a slate of electors for Trump to Congress. The document is at the center of a criminal investigation and documents obtained by the New York Times show that they were warned it could “appear treasonous.”

Ward, who was subpoenaed to testify before the committee, invoked her Fifth Amendment right to not self-incriminate for every single question asked by the committee.

Bowers said he still does not know who the “high up” person is and still would like to know, as Giuliani refused to identify his source.

“[It] just reinforced that the train gets rolling and it’s like people don’t realize they’re on a train and that they ought to be pulling the brakes or getting off this train, but it just keeps right on rolling,” Bowers said of the false electors scheme. “So, what’s the next thing that we could do on our crazy train?”

Oro Valley Republican Mark Finchem also espoused some of the same legal theories, and Bowers later recalled seeing a University of Arizona term paper from Finchem on which he consulted with former Trump attorney John Eastman. Bowers told the committee that he believed that Finchem was likely the “high up” source who might have been pushing Giuliani toward the legal theory.

During his own deposition, Finchem denied directly working with the Trump campaign and said he met Eastman through conducting “research” on constitutional scholars.

“I never heard of such an authority or thing ever,” Bowers said he told Giuliani who replied, “Well, you know, we’re all kind of Republicans and we need to be working together.”

Bowers said it was at this point that he knew he was being “worked,” and Trump chimed in and said they were just “asking [Bowers] to investigate.”

He left the first conversation asking Giuliani to bring him proof. But instead of evidence, all Giuliani brought to the table was more pressure to act. After an informal hearing was done at a Phoenix hotel, Giuliani and five Arizona state senators gathered with Bowers in the Senate caucus chamber on Dec. 1, 2020.

At that meeting, Giuliani asked Bowers and those present to call a special session to decertify the results of the election.

“Mr. Leach, Senator Leach, was a bulldog in the meeting and really went after him,” Bowers said of state Sen. Vince Leach, who was ousted in last year’s election by the QAnon believing election denialist Justine Wadsack. Bowers said that Giuliani once reiterated the common party affiliation among those present and said Giuliani said he was “amazed at the hostility.”

Giuliani and his team also brought in some people who were “IT oriented” and one man who “had some military” background to talk to them about alleged “proof” of fraud, Bowers said.

Bowers remembered having one more call with Trump, this time shortly before Christmas 2020.

He was sitting on his front patio when his phone rang and a woman on the line said it was the White House and asked if he would hold for the president. Moments later, he was greeted by Trump, who asked him how he and his family were doing.

Bowers called the moment “surreal” and said he thanked the president, but told him he “won’t do anything illegal” for him. They wished each other a Merry Christmas, gave well wishes to each other’s families and ended the call.

Bowers said he assumed that what Trump meant by “I remember what you told me” was a reference to Bowers insisting he wouldn’t break his oath.

The Mesa Republican was also pressured right up to Jan. 6 by other members of his party, including U.S. Rep. Andy Biggs, who called him that morning, asking him if he’d consider decertifying the electors, Bowers said.

But Bowers also faced intense personal pressure in another form.

The group also protested numerous times outside of Bowers home, often leading caravans of angry protesters around his neighborhood and often right up to his door. In one instance Bowers detailed, an armed man sporting a Three Percenter logo stood on his property yelling at his neighbors.

“I never felt like I was in imminent danger, per se, but in those situations all it takes is one of them to think: ‘I’m going to prove that I’m a great patriot and so I’m going to pull out a gun and shoot this guy,’” Bowers said, adding that he kept a journal of all the times they came to protest.

His home was the center of nine total protests. One time Bowers recalled being outside at his church, which is near his home, dressed up for a Christmas Nativity scene when he saw a convoy with Trump flags heading down the road toward his house. He called his wife to warn her and told her to call the Maricopa County Sheriff’s Office.

Bowers shrugged off comments from members of the committee who said that he might be seen as “heroic” or “courageous” for continuing to take the stance he has in light of such harassment.

“It made me upset that they would — especially with my daughter being sick. I mean, as you know, she passed away. But who are these people that they would do this to America? Is this what civil discourse means nowadays? Have we got that bad that we have to act this way? It’s just — so when I get that way, I just say: It’s like, okay, I’m on, game on, I’m out. And so — but I don’t consider myself heroic,” Bowers said, adding that he often had to explain the protesters yelling and harassment to his sick daughter who was at his house.

“I’m against bullying and emotional violence against anybody, especially over the sacredness of our vote, so thank you,” Bowers said ending his deposition to the committee.

Bowers lost his bid for the Republican nomination for his seat to the Trump-backed QAnon believing candidate David Farnsworth who won his seat.