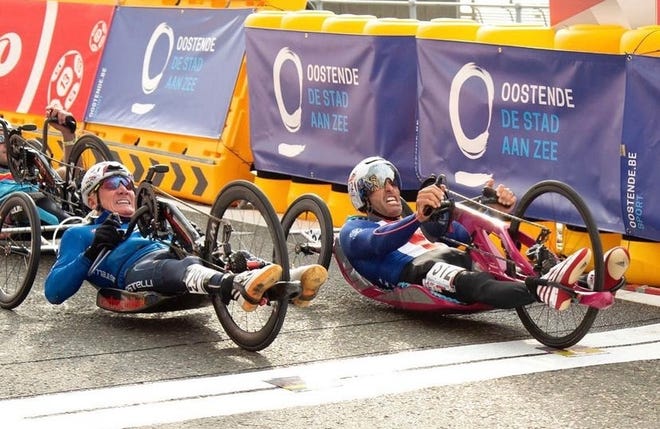 Whether Ryan Pinney is 30,000 feet in the air or waiting to start a handwheel race, he wants to be the best in the world.

Born in Phoenix, he finished second overall at the US Paralympic Team Trials on June 19 in Minneapolis and qualified for the USA Paralympics Cycling team at the Paralympics in Tokyo. As a debutant, he will compete in the H3 time trial and road race and hopes to be selected for the team relay this summer.

As a former boom operator in the US Air Force and the Arizona National Guard for 14 years, six years of active service, Pinney flew in KC-135 Stratotankers refueling aircraft. The job at a young age enabled him to build the Mamba / Kobe Bryant mentality associated with hand cycling.

“You put the responsibility for $ 2 million airplanes in the hands of a 19 year old kid, it matures very quickly,” Pinney said. “It also took me to where I am today because I wanted to be.” the best on-board tanker ever. If I told someone I was the best, it wasn’t because I was arrogant. I wanted them to have confidence that they could rely on me to do the job in any situation. ”

In 2012, while participating in a BMX race in Las Vegas, he fell and fractured his back, paralyzing him from the waist down. Aware of the entire impact, he cocked his head, thinking he would alternatively roll over on his shoulder.

Almost a year after Pinney’s accident, the Free Wheel Foundation introduced him to the sport by gifting him a handwheel, and he “just ran with it because there was no better term,” he said.

The Free Wheel Foundation, based in Mesa, supports the recovery process of injured military personnel, in particular with sporting activities with a focus on cycling.

Pinney has been racing competitively since 2014.

“I didn’t know what handwheeling was. I loved cycling in every way before I got injured, ”said Pinney. “Since that day I’ve been telling people, no matter what happens in your life, because we all have different barriers, don’t stop doing the things you love. They find a new way to do it. “

Pinney had heard of the Paralympic Games but had never seen them on television because of the poor coverage. While recovering in the hospital, he observed her for the first time and realized that something was there for him.

For Tokyo, however, NBC Universal announced a record 1,200 hours of Paralympic programming on February 24, with the very first prime time coverage on NBC and the first Paralympics coverage on Peacock. This will give viewers a glimpse into the Paralympics like never before and increase the appreciation for those like Pinney.

His second place in the World Cup was the highest in the H3 rating that Team USA has ever had. Handcyclists are classified as H1-H5, with H1 being the most impaired. H1-H4 handcyclists compete against each other lying on their backs; 5 athletes run in a kneeling position.

Pinney knows the reality of the talent level among the athletes who qualified for this summer in Tokyo.