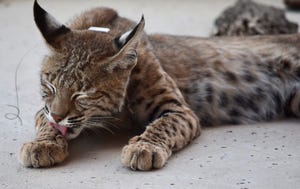 A Tucson bobcat that was part of a study on animals living in urban areas was found shot and killed, reported Friday.

The female bobcat, nicknamed Sadie, was shot and killed in the early morning of Sept. 28 near North Ironwood Hill Drive and North Painted Hill Road, according to a blog post released by the organizers of the study.

Sadie was one of 25 cats part of the Bobcats in Tucson Research Project, partially funded by a grant from the Arizona Game and Fish Department. The project is seeking to observe the cats’ behavior in Tucson’s urban areas to reduce any risks of conflict with homeowners and residents in the city, according to the study’s website.

This is the second bobcat within the program to be killed within a week. On Oct. 1, Jonathon, a male bobcat, was found shot at a home near Starr Pass Boulevard and Shannon Road after it stalked the homeowner’s chickens. Game and Fish investigated, but did not cite the homeowner because he was protecting his property.

Anyone with information about the bobcat’s death is asked to contact Arizona Game and Fish at their tip line: 1-800-352-0700.