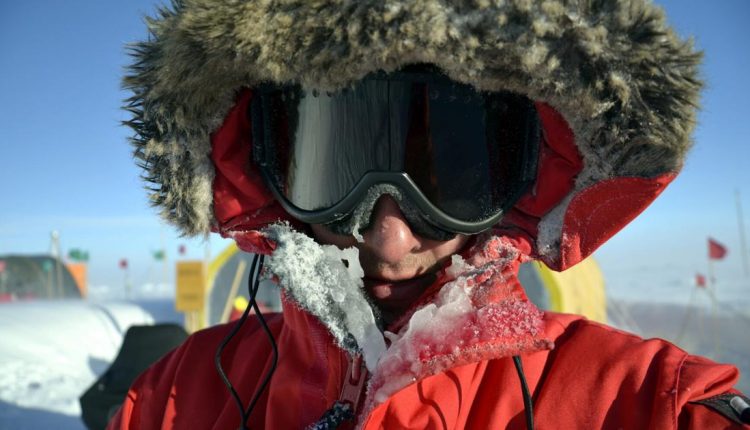 Climate scientist Chad Greene studies ice in Antarctica, so when the pandemic gave him a chance to work remotely from anywhere he wanted, he naturally chose Tucson.

“Antarctica is technically a desert, so it’s just a home away from home,” Greene said with a laugh.

So far, the choice has been a productive one.

Working out of his home office in the Old Pueblo, the researcher from NASA’s Jet Propulsion Laboratory in Pasadena, California, helped pioneer a new way of measuring the massive — and massively important — ice shelves that encircle the southern continent.

An aerial photo from 2018 shows the leading edge of the Totten Ice Shelf in Eastern Antarctica.


Those shelves block the flow of glaciers and prevent slabs of inland ice more than a mile thick from sliding unfettered into the ocean, triggering a potentially catastrophic rise in global sea levels.

For decades, scientists have used altimeters to monitor the thickness of the continent’s ice in the face of global warming. The new technique by Greene and company uses optical, thermal-band and radar images from orbiting satellites to create high-resolution maps of the entire coastline and chart changes to the ice shelves over time.

According to their calculations, Antarctica has lost some 14,710 square miles of ice shelf since 1997. That’s an area larger than the state of Maryland and represents nearly 2% of the continent’s protective shelves.

Greene has posted an animation to YouTube showing the retreat of the ice shelves, set to the Patsy Cline song “I Fall to Pieces.”

The researchers also found that almost as much mass has been lost to calving and crumbling along the front edges of the shelves — some 6.5 trillion tons of ice — than has been lost to the melting and thinning of the ice sheets as a whole over the past quarter century.

Scientist Chad Greene spent several weeks in this one-man tent during his first Antarctic field season in late 2012 and early 2013.

The team of Greene, Alex Gardner and Nicole-Jeanne Schlegel from the Jet Propulsion Laboratory and Alexander Fraser from the University of Tasmania in Australia saw their findings published in the journal Nature on Aug. 10.

Since then, Greene has been interviewed by CNN and The Washington Post, in part because the new study points to something grim unfolding in Antarctica.

As the ice sheets weaken and crumble, they can lose their integrity and behave in unexpected ways.

In March, the Glenzer Conger Ice Shelf in East Antarctica suddenly collapsed without warning. Though comparatively small as shelves go — it merely covered an area about twice the size of Tucson — it was located in the coldest and seemingly most stable part of the continent.

“It just fell apart after thousands of years of being rock solid, and no one saw it coming,” Greene said. “It kind of makes you wonder what else we might not see coming.”

When he’s not in Antarctica, post-doctoral research fellow Chad Greene of NASA’s Jet Propulsion Laboratory works from his home in Tucson.


Climate scientists are especially worried about signs of distress in the ice shelves fronting two much larger and far more critical spots: the Thwaites and Pine Island Glaciers at the western edge of the continent.

Greene said Thwaites is roughly the size of Florida and particularly susceptible to a rapid collapse that could destabilize the entire West Antarctic Ice Sheet, where enough water is locked away to raise oceans worldwide by a dozen feet or more.

That’s why some have taken to calling Thwaites “the doomsday glacier,” though Greene isn’t crazy about the term.

While it’s true that the West Antarctic Ice Sheet could eventually collapse as the planet continues to warm, he doesn’t consider it likely and doesn’t expect it to happen in any of our lifetimes.

“It’s hard to give context without sounding an alarmist,” he said.

Climate scientist Chad Greene, second from the right, sits with fellow researchers on the wing of a World War II-era DC-3 used for science missions over Antarctica in 2018.

Though his current work mostly involves analyzing satellite data from the kitchen table of his rented bungalow in Armory Park, Greene has spent two field seasons on the southern continent so far.

He was first there in late 2012 and early 2013 at a place called Byrd Station on the West Antarctic Ice Shelf, where he camped for several weeks in a one-man tent at the height of summer in the Southern Hemisphere.

He said the coldest it got was about 30 below zero, but the sun never set. It just went in a little circle high in the sky all day and all night.

“That’s where I learned to sleep with a little eye mask on,” Greene said.

Glaciologist Chad Greene poses next to an iceberg topped with penguins during his second field season in Antarctica in 2018.


The glaciologist returned to Antarctica in 2018, this time to the eastern side of the continent. There he continued his work with other researchers studying ice sheets from the air in a World War II-era DC-3 with skis on its wheels and a cabin filled with high-tech science gear.

Greene joined the Jet Propulsion Laboratory as a post-doctoral research fellow in 2019.

He had no real connection to Tucson before he moved here two years ago, after COVID-19 shut down the JPL offices in Pasadena. He said he had passed through Southern Arizona once and really liked it, so he decided to return.

When he isn’t studying ice sheets, he likes to explore his downtown neighborhood and the Sonoran Desert landscape from his bicycle or his motorcycle.

A patchwork of sea ice off the coast of Eastern Antarctica, photographed through the propeller of a research airplane in 2018.


“Tucson is just a good place to be,” Greene said. “The people are friendly, the food is good, and the bicycle infrastructure is great.”

His professional life seems happier and more productive here, too, which is why he is a little apprehensive about what’s going to happen as pandemic protocols are lifted and places like JPL start calling their remote employees back into the office.

Greene feels as if he has struck just the right balance in Tucson.

“I’m here in Arizona for the scorching heat, and I go down to Antarctica for the freezing cold,” he said. “I guess you could say that, on average, I’m very comfortable.”