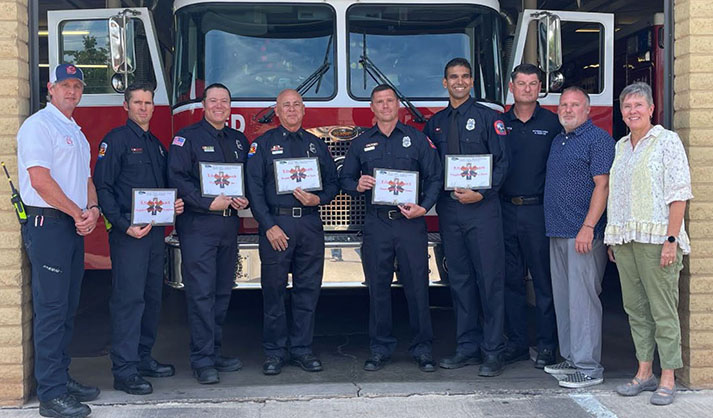 SEDONA – Sedona Fire District has had a busy summer responding to emergency incidents along creeks and recreation areas.

That day, a 911 call came in about 1:30 pm reporting someone had fallen approximately 30 feet at the creek about a half-mile from the parking lot. While they were en route, people at the scene began administering CPR. Others met the SFD responders at the parking lot and guided them to the patient

After hiking in, they found a 17-year-old boy had been removed from the water with CPR still being administered.

Taking over the life-saving effort, crews found the teen had no pulse and was not breathing. They defibrillated the patient, and he soon had a pulse and was breathing on his own.

Crews then carried the teen out in a Stokes litter basket. Though he was regaining consciousness, he was “still having symptoms” and was loaded into a Guardian Air helicopter and flown to Flagstaff Medical Center. He recovered and was released a few days later to finish his family vacation.

“The successful outcome of this incident, largely due to bystanders’ early CPR efforts, rapid defibrillation and extrication to the hastily established landing zone by Sedona Fire Crews, air evacuation by Guardian Air, and definitive care at Flagstaff Medical Center is exactly why we train , coordinate, and pre-plan with our regional partners, and invest in modern life saving equipment,” Division Chief Dori Booth stated in a Monday news release.

“However, even with our robust training, coordinated efforts, and modern equipment, the outcomes are not always successful. We kindly ask those that choose to recreate within the Sedona Fire District to be mindful of your limitations and the potential risks that can be encountered during your time in the outdoors. This includes the hike to and from the site you are visiting, hazards above and below the surface of the water, rapidly changing weather conditions, and the risk associated with swimming in general. Sedona Fire has already had multiple incidents along or in our creeks and rivers that did not have outcomes that were as favorable as this incident; including a recent fatality.”