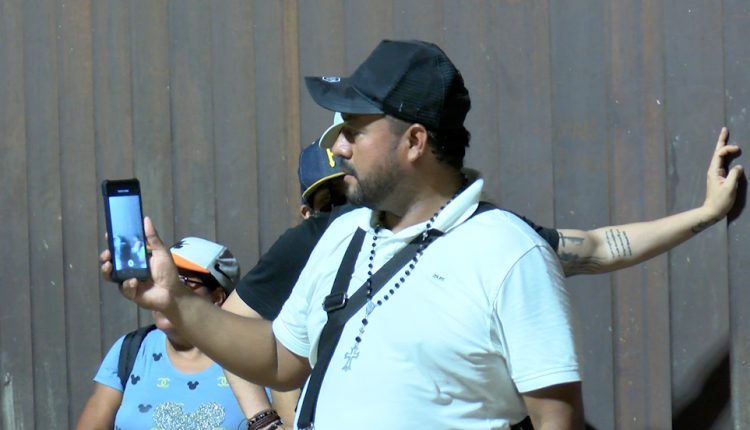 As of July they still remain open and there’s no signs of construction starting soon.

Even though piles of unused border fences sit not a mile from the gaps.

On Wednesday morning the first group of migrants arrived after 2:30 am

According to Yuma’s Chief Patrol Officer, local agents have already apprehended more than 10,000 migrants this month,

Attempting to seek asylum in the states, and give their families a better life.

“I got here with my family and I am very grateful to god and our lady of guadalupe that we’re here. Now it’s time to find a better future for my family especially for my son,” Yuli, from Peru said.

This gap where some migrants cross is at the Cocopah Reservation, but it likely won’t be walled off anytime soon as it is sovereign land.

Migrants who have crossed here before say they found out it was an easy place to get into the United States from word of mouth.

“From the internet, people share their experiences,” Sofia from Russia said.

The gaps which DHS will likely close in the Yuma Sector are up near the Morelos Dam.

This video given to us from local border patrol shows how the gaps can be problematic.

Illegal immigrants run through the open wall gaps in Yuma and into a waiting car.

These immigrants ran through the gaps, and ag fields, to a waiting car on Somerton Avenue.

Agents say they were able to pull this vehicle over, arrest the driver, and process the two illegal immigrants.

While closing these gaps would prevent migrants running through, and also alleviate some of the food safety concerns with many agricultural fields at this part of the wall.

But in terms of number of apprehensions, those likely would not go down.

If the gaps near the Morelos Dam closed, migrants could simply cross 5 miles south of them at the Cocopah Reservation.

Also, most of the border wall from Los Algodones down to San Luis is built inside the US – Mexico border.

With the actual border being in the middle of the Colorado River.

Meaning even if this gap was closed, migrants would still be able to simply walk up to the wall, be in the United States, and make their asylum claim.