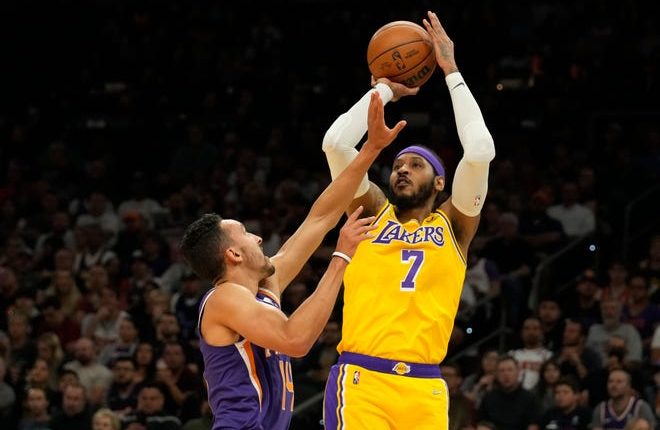 There are plenty of unrestricted free agents out there the Phoenix Suns could sign with their last standard roster spot.

Carmelo Anthony is one of them.

Bally Sports NBA Insider Brandon “Scoop B” Robinson tweeted the New York Knicks and Boston Celtics are interested in the 10-time All-Star, but it’d be interesting to see Anthony playing for a championship contender in what would likely be his last NBA season.

Plus he’s someone who can deliver 20-plus points off the bench on any given night. Anthony averaged 13.3 points in 26 minutes a game during his one-year deal for nearly $3 million with the Lakers, hitting 37.5% from 3.

Sun’s General Manager James Jones has a history of having one roster spot available. He used the final one last season to sign Bismack Biyombo in January after having conversations with him for months.

The active and physical 6-8 big played a role in the Suns having the NBA’s best record last season.

So Phoenix could wait to fill that spot, leave it open and have it there if they’re able to pull off a deal before the trade deadline or just add a free agent during the season like they did with Biyombo.

The Suns have a full mid-level tax exception, but can’t use more than $6.5 million because of the hard cap.

Which current UFAs would be good fits for Phoenix?

He seemed like an ideal fit for the Suns going into the 2019 draft.

Then Phoenix drafted Jarrett Culver sixth overall out of Texas Tech, but then traded his draft rights to Minnesota for Cam Johnson, the 11th overall pick, and Dario Saric.

Those two have clearly worked out for the Suns while Culver hasn’t lived up to being a lottery pick.

That doesn’t mean he can’t play.

At 6-6, Culver has good size and is athletic. The Suns pride themselves on having long, athletic wings like Mikal Bridges and Johnson.

Culver fits that mode in terms of his length and athleticism.

Bridges is an iron man. He hasn’t missed a game of his entire NBA career and led the league in total minutes played last season, but the Suns could use another player with length and athleticism.

Not good. Not good at all, but Kelly Oubre Jr. was a 32% 3-point shooter in his first four seasons with Washington.

If Culver could get that number, the Suns would have a steal on their hands with him as a 15th man.

He could’ve played the role Frank Kaminsky did in Phoenix.

Coming off winning a championship with Golden State, Nemanja Bjelica is a stretch four who can run pick-and-roll, handle the ball and finish around the rim, but the Serbian is set to play for Fenerbache in Turkey.

Not the best defender, but Bjelica has decent hands for deflections

As good as Saric has looked playing for the Croatian national team this summer, he still missed all last season after suffering a torn right ACL in the 2021 finals.

JaVale McGee wound up in Dallas this offseason after giving Phoenix 9.2 points on 62.9% shooting, 6.7 rebounds – and crazy energy off the bench last season

Biyombo can bring those qualities as that backup big to Deandre Ayton. Curious to see how Jock Landale is utilized in his first year in Phoenix, but another big wouldn’t hurt.

Got some big names still out there like LaMarcus Aldridge, Hassan Whiteside and DeMarcus Cousins, but Ed Davis may be someone to consider.

Davis would understand his role and live in it.

Paul has a history of getting big lob buckets, too.

Avery Bradley is still out there.

Dennis Schroder and Lou Williams are too, but so is another point guard who gets under the skin of his opponents.

Every team can use a player like Facundo Campazzo.

The Suns have Paul, an all-time great, running the show.

Cameron Payne is Paul’s backup, but Campazzo could be that third point guard.

Averaging 5.6 points in his two seasons with Denver, the 31-year-old managed to only connect on 30.1% of his 3s last season, but he can run the pick-and-roll and find guys.

Payne averaged a career-best 4.9 assists to Campazzo’s 3.4 last season, but Payne was glued to the bench the final three games of the Dallas series Phoenix lost in seven.

Injuries impacted Payne’s play at times, but he wasn’t the same guy who made a consistent difference in helping the Suns reach the 2021 finals.

Payne is coming back to re-establish himself. The Suns need him to do that so Paul can get the rest he needs to be full tilt come playoff time.

Two-way player Duane Washington Jr. could be that third point guard ready to go if needed.

Ben McLemore is a physical 6-3 guard who is not only a career 36% 3-point shooter, he hits tough 3s.

The high degree of difficulty on his makes partly stems from questionable shot selection, but he isn’t hesitant to take shots, especially up against the clock.

Josh Okogie is similar in build, but McLemore is more of a scorer than the Suns’ summer signee.

The Suns have never really found that consistent backup two for Booker.

Landry Shamet is supposed to be that guy, but he didn’t play up to expectations in his first season in Phoenix.

He should be more comfortable in Year 2, but McLemore averaged more points than Shamet last season and shot nearly as well from 3 as him.

Average gas price falls below $4 in Arizona, after record-high summer