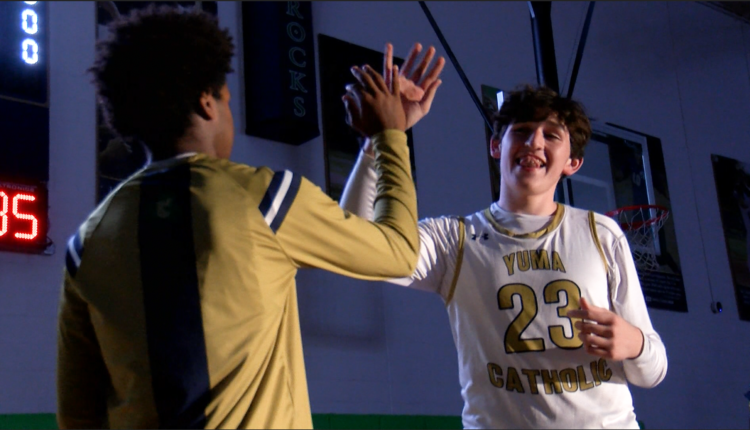 Lady Shamrocks dominate by 40, while boys remain unbeaten at 9-0

YUMA, Ariz., (KYMA, KECY) – It has not been since the 2016-17 season that both Yuma Catholic boys and girls basketball teams started the season off so great at once – that year starting 14-2.

Check back this year: the two Rocks teams came into Wednesday night at 15-1, the boys holding on to an unbeaten 8-0.

Starting with the girls, the big bad trio of Reese Sellers, Rian Martinez and Amanda Wiley picked up where they left off on Monday night, burying Tonopah Valley early.

Those three would combine for 42 of Yuma Catholic’s 55 points in the 55-15 win at Carol McElhaney Gym.

Not only is the offense clicking when needed, but in their eight early season wins, Bobby McGalliard’s Shamrocks have only given up more than 30 points three times.

The Lady Rocks now get a helpful rest over the holiday break, not getting back on the floor until January 3rd in a trip to Odyssey Institute.

On the boys side, Luke Stuckey’s squad could do no wrong in a 79-36 win at home over The Phoenix of Tonopah Valley behind a plethora of scoring.

All of that scoring began right off the tip in a family affair. The Yuma Catholic “splash bros” Lucky and Sebi Patane combined for five threes in just the first quarter en route to a combined 34 points at the end of the night. Braden Moore also chipped in 14 points.

They won’t get as long of a rest as the ladies though, returning to the court on December 27th to take on Raymond S. Kellis in the Winter Hoops Shootout at Cactus High School.