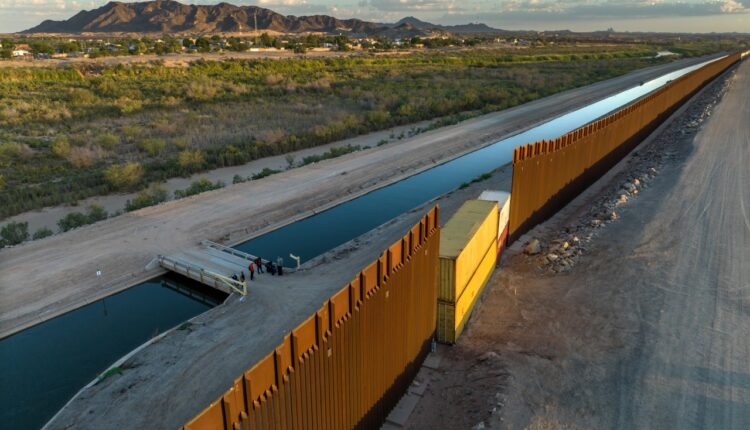 Shipping-container wall is all gone in southwestern Arizona near Yuma

SOMERTON, Arizona (Border Report) — Fernando Quiroz and his band of volunteers with the Arizona-California Humanitarian Coalition have noticed fewer migrants entering the US in recent weeks near Yuma, Arizona.

This is an area where, traditionally, 300 to 500 asylum seekers cross the border at night.

It’s also the place where former Arizona Gov. Doug Ducey, without federal government approval, put up hundreds of shipping containers to seal gaps along the border barrier to prevent the flow of migrants back in August.

With Ducey out of office, his successor has agreed to take down the containers. All have been removed from this part of southwestern Arizona.

“The containers were meaningless and served no purpose,” said Quiroz. “It cost Arizona taxpayers almost $170 million.”

Quiroz referred to the total cost of all the containers erected throughout the Arizona-Mexico border, some of which are still in the process of being removed.

“It was a total waste of money,” he said.

He pointed out that, ironically, now that the containers are gone, the number of migrants has actually gone down.

US Customs and Border Protection data indicates that for the month of November, the latest statistics available, 27,751 migrants were apprehended in the Yuma sector, slightly more than recorded in October.

The city of Yuma last month kept in place an emergency proclamation due to the unprecedented number of migrants entering the area. Additionally, Yuma County declared a countywide emergency to bring attention and preparedness for the migrant situation, and the city of San Luis also issued an emergency proclamation due to the humanitarian and health crisis resulting from mass migrant gatherings at the US-Mexican border.

In the days leading up to Dec. 21, when Title 42 was set to expire, the City of Yuma said the region was seeing over 1,000 migrants crossing the border each day. Many of those migrants are bused by the Department of Homeland Security to San Diego and Tucson or placed on flights to other DHS facilities, the city said.

However, the US Supreme Court is leaving Title 42 — the public health order that allows border agents to expel migrants to prevent the cross-border spread of COVID-19 — in place possibly through June.

Quiroz told Border Report they have definitely seen a drop in the number of people seeking their attention at the border.

“The numbers have decreased quite a bit, it’s the holidays, and the important dignitaries, senators coming to this area and Mexico is holding individuals back right now so there’s not the numbers to be seen,” said Quiroz. “We’re very fortunate the numbers have declined, in the last five to six days that allows our shelters to build back up get more supplies to make sure they’re ready for the next surge of individuals.”

Quiroz is certain, with or without the containers, more migrants will continue to come, especially if they don’t open ports of entry to asylum seekers.

“Allow them to go through a port of entry to do things properly and in a humane way, don’t ask them to cross rivers to cross deserts, let them come in and turn themselves in and say ‘I’m seeking asylum.’ “

Recently, President Biden announced he would allow asylum seekers to access eight ports of entry along the southern border including PedWest, a pedestrian crossing between San Diego and Tijuana.

But a timeline has not been provided.