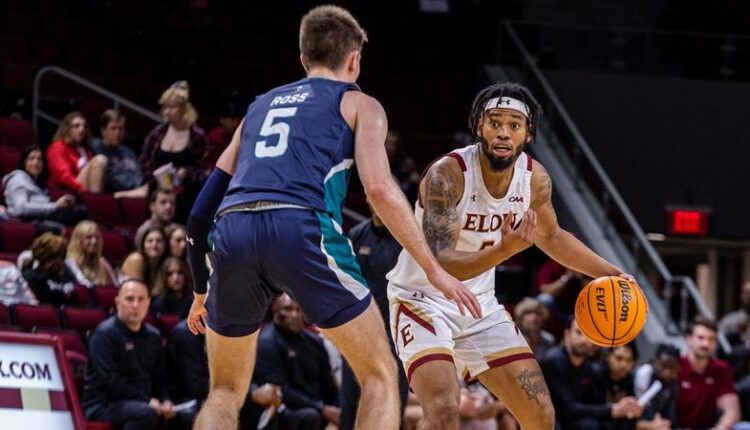 ELON, NC – Riding the momentum of a strong finish to the end of the first half into the second, UNCW earned its 12th-straight victory with an 81-66 result over a short-handed Elon University men’s basketball team in a Colonial Athletic Association game on Wednesday night , Jan 4, at Schar Center.

Elon’s Zac Ervin led the Phoenix in scoring for the second straight game as the senior posted 16 total points on 6-of-11 shooting while going 2-of-4 from three-point range. Torrence Watson added 14 points and a team-best eight rebounds off the bench while Sean Halloran contributed with 13 points for Elon (2-14, 0-3 CAA).

UNCW’s Trazariah White led all scorers with his career-high 26 points. Amari Kelly had 15 for the Seahawks (13-3, 3-0 CAA) while Jamarii Thomas and Maleeck Harden-Hayes both added 12.

• After Elon went ahead 4-2 after an Ervin jumper, the Seahawks rallied off six unanswered points to go in front 8-4. John Bowen III nailed a three-pointer from the top of the key to cut the Phoenix’s deficit to one, 8-7, but a pair of layups from UNCW increased its lead to five, 12-7.
• Elon would take the lead after an ensuing 11-5 run. Ervin scored seven points in that stretch including a three-pointer from the top of the arc to put the maroon and gold ahead 18-17 with 11:49 left in the first half.
• The Seahawks answered with a 9-2 run to retake the lead. A three-pointer by Harden-Hayes put UNCW ahead 26-20 to force a Phoenix timeout at the 8:33 mark.
• The Phoenix brought it back within two, 27-25, after a five-point spurt from Watson. A jumper by UNCW put the Seahawks ahead by four before both teams went into a cold spell over the next four-plus minutes.
• An Ervin layup made it a four-point game, 31-27, but UNCW closed out the opening half on a 7-2 run to take a 38-29 advantage into the break.
• UNCW continued its momentum at the end of the first period to expand its lead to 14, 43-29. Elon fought back to bring his deficit to single digits, 45-36, after Ervin’s second three-pointer, but White made a jumper to give his team an 11-point cushion before the first media timeout of the half.
• Watson made a tough jumper in the lane to bring the Phoenix back within nine, 51-42, with 13:47 left in the game. The Seahawks however came back with a 13-2 run over the next 4:21 to push their lead to 20, 64-44.
• UNCW led by no fewer than 15 points over the next six-plus minutes, but the Phoenix started trimming the Seahawks’ lead and made it a 12-point game, 72-60, after a Watson layup with 3:43 left in the game.
• That would be as close as the Phoenix would get as UNCW would see its lead expand as many as 19 points before coming away with the 81-66 victory.

• Elon shot 24-of-48 in the game, shooting at least 50 percent for the second time this season. The Phoenix shot a blistering 52 percent in the second half alone against the Seahawks.
• Due to injuries, Elon had eight scholarship players available for tonight’s game. Max Mackinnon missed his first game of the year while RJ Noord Jr sat out his second straight contest. The Phoenix was also without the services of Andrew Junkin and Deandre Smart, who both have been out with injuries for most of the season.
• JaDun Michael started in place of Mackinnon for the Phoenix, making his first start since the fourth game of the season. The Burlington, NC native had six points in 19 minutes.
• Watson had his best outing since scoring 20 points at NC State on Nov. 19. The St. Louis native was also one rebound shy of tying his career best.
• Thanks to Watson, Elon outscored UNCW’s reserves 22-18. The Seahawks dominated on the boards in the game, 40-25, including grabbing 16 on the offensive end.

Elon will be idle for a week before returning to the court to host Piedmont Triad rival and CAA newcomer North Carolina A&T next Wednesday, Jan. 11. Tipoff is set for 7 pm at Schar Center.