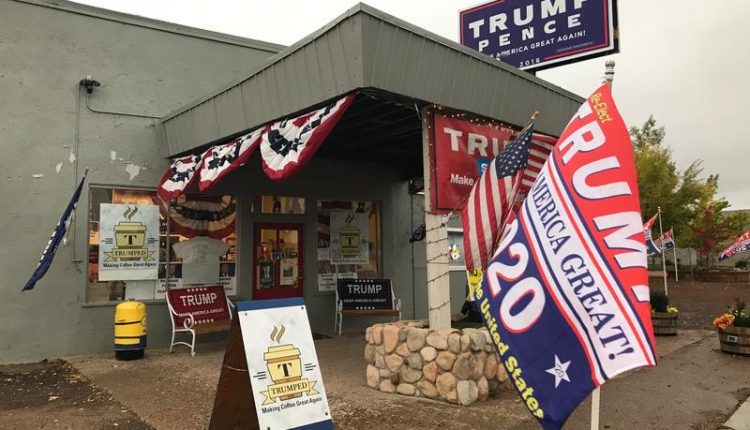 Arizona turned purple after the midterm elections when both Republicans and Democrats won high profile competitions. That “blue wave” missed rural Navajo County, however, and some Show Low business associates want it to stay that way. They run a one-of-a-kind store that sells goods related to President Trump. Aaron Granillo from KNAU introduces us to this couple who are committed to conservative values.

A steady stream of customers arrives at the “Trumped Store and Coffee House” every morning. Barista Sean Lynch conjures up a latte under a sign that reads “Making Coffee Great Again”. He pours foam over espresso and milk and is still refining his latte work of art.

“Sometimes I make random abstract shapes and say, ‘Look, that’s Trump’s head,'” Lynch jokes. “People will be like ‘no way’. Just kidding, I really can’t do that well yet.”

The store is packed with customers from all over the country. Some come for the coffee, others for the massive collection of Trump-inspired merch. Rosemary Quesenberry drove three hours to buy a shirt.

It’s not just t-shirts on the shelves. Everything from Trump teddy bears and rubber ducks to children’s books and mugs fills the shelves. There’s even a talking Trump toilet roll holder on the toilet that literally carries the president’s message, “Our leaders are stupid, our politicians are stupid …”

“I forgot how we stumbled on the toilet roll in the first place. We kind of found it and it was a huge hit, ”says Steve Slaton, co-owner of the Trumped Store.

Slaton opened the store with Karen MacKean in 2016. They converted this former mechanic’s workshop into an unofficial campaign center for then-candidate Donald Trump.

“We are passionate conservatives. We are here to hopefully preserve this very, very conservative area and maintain a strong republic, “says MacKean.” That is what we support so strongly for the policy of the president. “

Show Low is a conservative stronghold. The registered Republicans here outnumber the Democrats 3 to 1. But not everyone here likes the Trumped Store. It has been destroyed and the owners say they sometimes get threatening phone calls. It is also a popular place for peaceful protests.

“Every now and then there are demonstrations in the park next to them,” said Eric Kramer, chairman of the Navajo County Democrats. “But we’re doing our best to ignore them.

Kramer does not believe that the Trumped Store had a medium-term impact on the republican vote record of the region. After all, he says, Navajo County – outside of Show Low – has more Democrats than Republicans.

“We saw very good participation, and that also helped us to win national offices again for the first time in many, many years,” says Kramer. “We feel good about the direction of things.”

So did Steve Slaton and Karen MacKean. They even have plans to expand the Trumped Store.

“There’s another room over there that hasn’t been developed,” says MacKean. “Our plan is to turn it into a Trump Wine Bar.”

What the Stalemate on Capitol Hill Means for Your Drug Prices