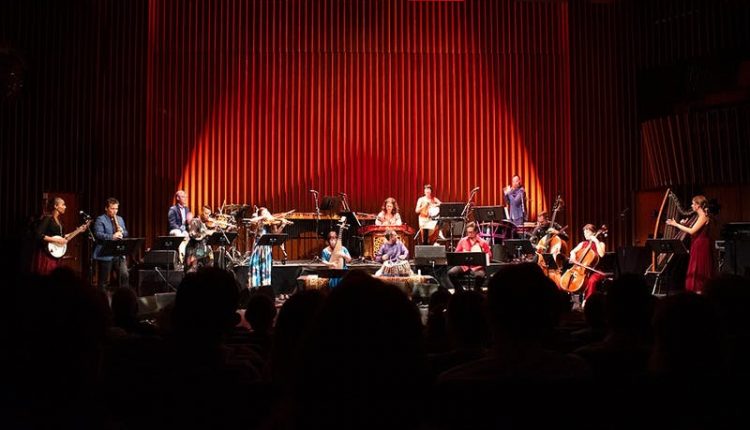 by Madeline Sawyer | 24 minutes ago


Thirteen Silkroad Ensemble artists performed “Phoenix Rising” with artistic director and Grammy Award-winning musician Rhiannon Giddens on Tuesday at the Hopkins Center for the Arts. The ensemble — composed by artists with diverse backgrounds and unique musical experiences — performed a program of 10 pieces, including new commissions, reimagined arrangements and two world premieres. The works drew inspiration from the North of Scotland, folk music from the American South, Japanese court music and Iranian folk music.

Many audience members were enthusiastic about the performance, participating in a vocal call-and-response led by Giddens and vocalist Mazz Swift at the beginning of the performance and giving a standing ovation at the end, prompting an encore by the ensemble.

“It was superlative. There’s no other way to describe it,” Aileen Gillett, an audience member from Claremont, NH, said. “I haven’t been to a concert in a number of years now because of COVID. What a way to come back. This kind of a show is just unbelievable.”

The Hopkins Center for the Arts’s Spaulding Auditorium is a familiar venue for the Silkroad Ensemble. The group first performed there as an ensemble in 2001, but some of its artists have since returned to give individual performances. Kojiro Umezaki, the ensemble’s shakuhachi player, also received a master’s degree in electro-acoustic music at Dartmouth.

During the performance, Giddens and tabla virtuoso Sandeep Das expressed the strong personal connection they feel to Dartmouth. Giddens told the audience that she feels “such a special connection to this venue,” calling the performance a unique way to continue their tour. Das spoke fondly of performing and teaching various classes at Dartmouth over the years.

The musicians put on a dynamic show, and their arrangements ranged from soulful and moving to upbeat and celebratory.

“I liked the quieter things,” audience member Da-Shih Hu said. “I thought the sequence around ‘Goin’ Home’ and then the pipa solo were so wonderful, moving and atmospheric.”

Some audience members said they appreciated the variety of pieces featured, which appealed to a broad array of preferences while simultaneously forming a cohesive program.

“My favorite was ‘Cut the Rug,’ the last one that was part of the performance,” Larissa Sharff of Cornish, NH, said. “I just really liked the sound, I liked the way that everything came together.”

Silkroad Ensemble’s music combines tradition and innovation, as can be seen in the lively and powerful pieces that comprise “Phoenix Rising.”

“We have been breathing life into older repertoire, yet we are also playing new repertoire,” ensemble harpist and composer Maeve Gilchrist said. “In all of this, we are carrying through the energy and excitement that Silkroad has always embodied and bringing it to new works.”

The ensemble aims to celebrate cultural commonalities through their work, doing so in part by grounding their music in cultural collaboration.

“’Phoenix Rising,’ to me, is a continuation of energy, and it also has so many layers. There is the energy of new members alongside the long-time members of the ensemble,” Giddens said. “The stage is shared by musicians from all different cultures, pulling together multiple conversations, but in a different place and time and energy in our country. It’s Silkroad, but it’s Silkroad for 2022.”

In addition to the touring ensemble’s performances, the group leads social impact and educational initiatives, such as music programming for students in low-performing schools, refugee artists, the incarcerated and emerging musicians. These educational music programs are central to pursuing Silkroad’s vision for a more equitable and just future.

“This world-class ensemble leverages incredible music to impact positive change, both through our music and through all of our social impact and education programs,” Giddens said. “My goal is to be a part of a musical conversation where we respect where we are all coming from and find the points at which all of our musics naturally converge. I want to be a part of something that is greater than the sum of its parts.”

While this is Giddens’s first season performing with Silkroad Ensemble as artistic director, she performed with the ensemble numerous times in the past. Giddens succeeded cellist and humanitarian Yo-Yo Ma, who founded the ensemble in 1998 and stepped down after leading the organization for 20 years.

“We were looking for somebody who is both global but also understands the tradition of American music,” executive director Kathy Fletcher said. “We needed to find somebody who could lead the organization into the next iteration and started looking at artists that had worked with Silkroad, that understand Silkroad, that have the same kind of passion for social impact that Yo-Yo Ma has.”

After Giddens flew to Boston and performed with Das, a current member of Silkroad Ensemble, she was chosen to succeed Yo-Yo Ma as leader of the ensemble.

“Just talking to her, researching her, listening to her music…she is really the perfect person to lead us into Silkroad 2.0,” Fletcher said.

The title “Phoenix Rising” refers to the new period that the ensemble has entered. Under Giddens, the organization has been restructured and its vision has evolved, she said.

“We have a lot of silver linings from the pandemic because all of a sudden, we were all grounded,” Fletcher said. “It gave us the opportunity to really think about restructuring the organization to be a world-class ensemble that uses the power of the arts to impact positive change in the world and really think about who we’re accountable to, how we can be systemic allies with people of color and an anti-racist organization.”