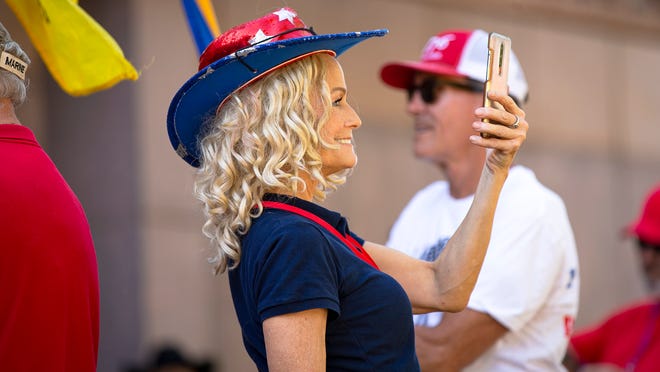 Several dozen people gathered on the lawn of the Arizona Capitol in Phoenix Saturday for the Justice for January 6th rally. The event was a localized version of the sparsely attended rally in Washington, DC a week earlier, and similar events had been announced in other states.

The rally at the Arizona Capitol began shortly after 2 p.m. with a prayer for the detainees.

Federal prosecutors have charged hundreds with crimes during the January 6 riot in which insurgents smashed doors and windows in the U.S. Capitol, attacked police officers, stole congressional property and threatened the murder of elected officials, including then Vice President Mike Pence .

Five people died during and after the riot. Rioters stormed the building that day to disrupt the Pence-led process that officially confirmed the election of President Joe Biden and the defeat of former President Donald Trump.

Although the crowd in the Arizona Capitol on Saturday was small, a number of politicians spoke, including Congressional candidate Jeff Zink, Rep. Walter Blackman, and former Rep. Anthony Kern.

The rally also attended a group of self-proclaimed Proud Boys, a far-right group with a history of violent conflict – and a Phoenix man who was indicted in the January 6 riot and who promised a federal court to himself as a condition for his release from prison not to be associated with the Proud Boys.

Blackman greeted the group during his speech. “I think these are the proud boys,” he said. “Let me tell you something about the Proud Boys. The Proud Boys came to one of my events and that was one of the proudest moments of my life. “

Zink, who previously told the Arizona Republic that he would attend the January 6 event, is a candidate for Congress. He talked about his son, who was arrested for his involvement in the riot.

Zink said he condemned “everything that happened to the demolition of the government building,” but alleged that the violence was committed by anti-Nazi members and was falsely attributed to supporters of Trump.

His son Ryan Zink had posted a video online that documented his actions that day. In one of them, Ryan Zink stood in front of his camera phone and said, “We tore down the gates! We’re storming the Capitol!”

Ryan Zink, who lives in Texas, was later arrested and charged with several riot-related crimes. In the court records, prosecutors presented other online posts from Zink that they had recovered, including one that said, “Literally in the Capitol shots fired on the ground, there is fire and gas, and several serious injuries were reported . “

Jeff Zink said Saturday that his son is one of many whose lives and livelihoods have been unfairly turned upside down due to their association with the January 6th events.

The crowd also spoke to Micajah Jackson, a Phoenix resident who was indicted after the January 6 riot.

Micajah Jackson claimed that the “radical” US administration, under Trump at the time of the uprising, used organizations like the FBI and the Capitol Police to “launch a coup against patriotic Americans like me and hundreds of thousands of others who are still to start”. be pursued. “

Jackson is being charged by the federal government with knowingly entering or staying in a restricted building or compound, as well as violent entry and disorderly behavior related to the riot.

The federal criminal complaint against Jackson shows photos of him walking next to members of the Proud Boys in front of the Capitol. He later told FBI agents that he had traveled alone and admitted that the Proud Boys had given him an orange armband to wear. The criminal complaint alleges that Jackson walked next to someone who was shouting through a megaphone, “Whose streets?” The group responded by shouting “Our Streets”.

Of the few dozen people at the rally, one group included people in “Proud Boys” T-shirts.

At the small rally on Saturday, Jackson said, “We are going to restore law and order to this country and bring God back to this nation and take back our local communities, our school boards, and put the America first agenda back in order.”

Kern, the Arizona politician, has been photographed in several locations outside of the Capitol raid but has repeatedly insisted he didn’t break through the building himself. On Saturday he said, “I was there on January 6th. January 6th is a big lie. It wasn’t a riot. It wasn’t treasonous.”

Kern, who later participated in the Arizona Senate vote counting, has refused to release any news or record of his trip to the January 6th event despite his name being on the ballot papers he was supposed to be counting.

His attorney responded to inquiries from the Arizona Republic that Kern was attending the rally as a private person who was “serving as a civil servant at the time of the riots.” In fact, Kern was still a member of the legislature. He had run for re-election and lost, but the new legislature was not sworn in until five days after the uprising.

Couy Griffin, a district officer from New Mexico and the leader of a group called “Cowboys for Trump,” also attended the event in Arizona. Griffin was at the January 6 riot. Later, at a January 14 meeting of the Otero County Board of Commissioners, he informed the meeting that he intended to pack firearms to return to Washington for the inauguration.

Despite being charged with unauthorized entry and disorderly conduct, Griffin said Saturday he was at the Capitol to pray peacefully with thousands of others for the nation. He drew cheers and applause from a few dozen people and described January 6th as “the most beautiful day of my life”.