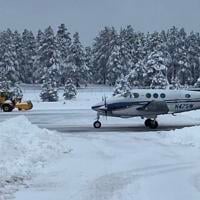 Snow and ice cause trouble for travelers in northern Arizona

Winter storms regularly wreak havoc on travel plans, and the snow that’s been falling since Saturday in northern Arizona is no exception. It has grounded planes, altered bus operations, and led to school closures and cancellations.

Whether it’s in the Flagstaff city limits or in Coconino County, public safety officials are keeping busy responding to vehicles stuck in the snow, slide-offs and minor collisions.

Since Saturday, Flagstaff Police have responded to more than 27 car accidents and crashes — that’s according to FPD Public Information Officer Jerry Rintala.

The code “961” is used by emergency responders to indicate a non-injury accident or minor collision. According to Coconino County Sheriff’s Office spokesperson, Jon Paxton, a quick glance at the recent incident reports for CCSO yields row upon row of incidents listed as “961.”

Avoiding a collision can be as simple as staying home, but for people who have to travel, Rintala had a few warnings.

“I would encourage folks to avoid Fourth Street if possible by Butler, or pretty much anywhere with a steep incline,” Rintala said. “Be mindful of what your vehicle can do, and what its capabilities are. If you have a rear-wheel drive vehicle, it might not do well in the snow. You may need to wait until the weather clears up to get back on the road.”

American Airlines canceled flights in and out of Flagstaff on Monday but resumed operations on Tuesday. By mid-afternoon Tuesday a few flights were delayed, but Airport Communications Officer Claire Harper said, “Commercial flights are getting back on schedule.”

Pulliam Airport has 8,800 feet of runway. According to Harper, that runway has been clear and open since the storm began. Harper said in addition to using eight pieces of heavy equipment to move snow off the runway, the airport is utilizing a new processing chemical this year to de-ice the landing strip.

“The runway has remained open; it’s the airline’s decision to cancel flights based on visibility. They definitely err on the side of caution,” she said.

The Daily Sun has reached out to American Airlines for comment.

Harper said, in the meantime, the parking lot is also accessible for travelers if they’re planning to board flights later in the week. However, she encourages customers to be sure they’re parked in designated spaces to allow for safe snow removal.

Mountain Line buses are still on the roads, providing service in the snowy city.

“Our drivers continue to do what they do: operate vehicles safely. We know people rely on transit during snow storms,” said Heather Dalmolin, the CEO of Mountain Line. “There are a couple of decisions that we have made that are related to the weather.”

For one, the Mountain Express Service to Snowbowl was canceled on Sunday, due to road conditions leading up to the slopes.

The buses also halted weekend service to Route 10 (serving the NAU campus), after the university announced they were canceling classes. Normal route deviations caused by K-12 classes were also changed because of Flagstaff Unified School District closures. However, for the most part, operations are the same.

Crews have cleared out bus stops, and Dalmolin praised the Arizona Department of Transportation, Coconino County, and the City of Flagstaff snow removal crews for keeping roadways accessible for buses.

“It’s been full speed ahead. We run delayed, like all traffic in the snow, but we’ve been able to continue providing transportation that people rely on,” Dalmolin said.

Deborah Alter has lived in Flagstaff for 30 years and says she’s never had trouble with parking on her street before. This year, a sedan parked in front of her University Heights home and became a barrier to getting the road plowed properly.

“We’ve never had trouble with vehicles left on the street. We and our neighbors all understand the danger and issues that can occur, and we all have a shared interest in allowing access to snowplows and other services such as fire, medical, mail delivery and waste management,” Alter said. “Our cul-de-sac is difficult enough during snow!”

Alter called the Flagstaff Police Department to issue a complaint about the parked car.

The City of Flagstaff’s Winter Parking Ordinance went into effect on November 1, making it illegal to park on the street between the hours of midnight and 7 am

According to Rintala, since this storm began, Flagstaff Police have handed out 25 tickets to people who violated the ordinance. They’ve also towed five illegally parked vehicles.

“That’s the last thing we want to do is tow vehicles,” Rintala said. “We’re not just out there looking at tow vehicles. We typically don’t patrol for it.”

He explained that for the most part, vehicles are towed after police receive reports from city plow crews who are attempting to clear streets and are interrupted by cars and trucks in their way.

The end goal is not to hand out unnecessary parking citations, but to make sure there is neighborhood access where needed.

“We try to do our best to work with the public. A lot of times as officers we will park behind the vehicle running our lights to help the plows and encourage people to come out and move vehicles before they get ticketed,” Rintala said.

In Alter’s case, the car blocking the road wasn’t exactly parked on purpose. It was left after the driver got stuck.

After she called the police, Alter said she met the vehicle’s owners — short-term vacation renters visiting Flagstaff. The property, she said, is owned by an investor in Phoenix.

On their way to the rental property, the short-term renters got stuck, and were unable to make it to the proper driveway in their car. According to Alter, the car’s owners were cooperative and tried to help dig their car out with sleds. When that didn’t work, they agreed to arrange for the vehicle to be towed.

Alter’s driveway is just one of more than 27,000 in the city of Flagstaff. In order to plow the entire city, the street section employs a fleet of 20 plow trucks, two six-wheel spreader trucks, eight road-graders, five loaders and a truck-mounted snow thrower. The crews put down cinders for traction.

Alongside city plows are snow removal crews from ADOT, which are responsible for clearing Route 66, and county teams working outside city limits.

“I would encourage everyone to not park on the street, even during the day, because plow operations are 24/7 during big storms,” ​​Rintala said.

Viral images posted by the Flagstaff Police Department and ADOT are making their way across the internet — pictures of people playing along the shoulder of Interstate 17 and trespassing on train tracks in the downtown Flagstaff snow. Those pictures are a reminder of what people shouldn’t do when they want to play in powder.

“We encourage people to come up and enjoy snowplay areas,” Rintala said. “But be mindful of staying out of the roadways. You should go to designated snowplay areas.”

Rintala points to the City of Flagstaff’s website, encouraging people not to seek out their own places to sled, but to stick to places that are already pretty safe and approved for use.

“Be respectful with snowplay equipment; if you bring it in, bring it out,” Rintala said. “Parking is also a huge thing, we encourage people to obey parking rules.”

Rintala said police and first responders need access to roadways, and at times cars have congested or blocked roads when parking near popular snowplay areas and sledding hills.

“Lone Tree and JW Powell, for example, get congested. There’s an area on Ponderosa Trails where people occasionally park on the roadway. Don’t block the road. Don’t be afraid to walk a little farther and make sure that you’re parked safely,” Rintala said.