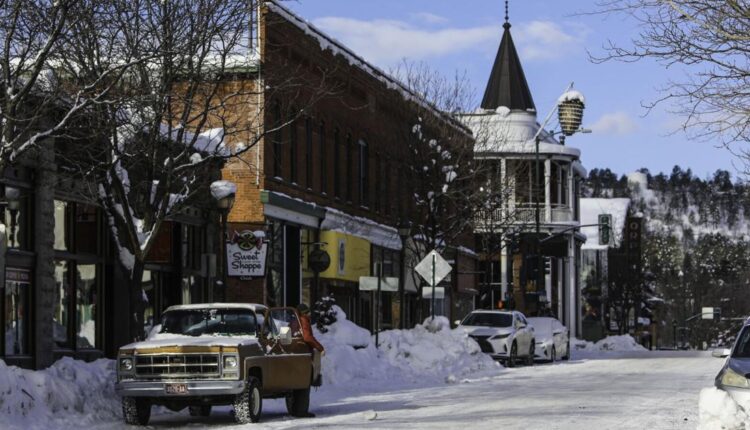 As of Monday morning, snowfall in Flagstaff hit a cumulative 60.4 inches for the month of January, making it the third snowiest January since record-keeping began in 1898. The number is just 3 inches behind the second place spot of 63.4 inches, set in 1980, but a far cry from the highest record of 104.8 inches set in 1949.

According to the National Weather Service (NWS), normal snowfall for the month is considered 20.4 inches. The snowfall that has ushered in 2023 is the result of a string of highly “active” weather systems, said Reggie Roakes, meteorologist with the NWS station in Flagstaff.

As opposed to the warm weather Flagstaff experienced in December, which Roakes explained occurred in opposition to the “cold snap” that brought extreme frigidity to the eastern US, January has been characterized by the onslaught of atmospheric rivers in the jet stream — the same that are bringing floods to northern California.

“These atmospheric river events are where you get the jet stream just flowing perfectly off the Pacific Ocean into continental US,” Roakes said. “It’s just pumping moisture. Here in Arizona, or at least the northern half, we’re able to take advantage of what moisture is left over after it makes it over other ranges in California.”

These weather systems have been occurring in defiance of general climatological expectations of a dryer, La Niña winter, Roakes said, which can sometimes occur when “smaller scale influences” drive weather patterns away from broader predictions.

“Right now, the prediction is for [the El Niño-Southern Oscillation] to start transitioning more to neutral phase,” he added.

As for what lies ahead, “the snowpack has already set us up pretty well,” Roakes said. “That’s going to be influencing our temperatures from here for a while to help keep temperatures down, at least with nighttime lows.”

Lows are expected to hover around 10 degrees Fahrenheit for the remainder of the week. Cold temperatures have two major benefits following heavy snowfall, Roakes explained. The first is that it helps prevent all the current snowpack from melting and flooding drainages — a possibility that Roakes said “is not a concern” due to current cold temperatures.

The second is that the colder the weather, the longer the snowpack will stay into the spring, preserving moisture to stave off fire season.

“If we started losing the snowpack too early, then that could start influencing us come April, May,” Roakes said.

And while it’s too early to say what February and March will bring, Roakes said that current patterns are expected to hold for a while.

“The indication is that we’re going to be staying on the cooler side, with a system at least every couple of days to a week to help bring a couple additional shots of moisture,” Roakes said. “So definitely not drying out, thank you.”

The next shot of moisture — and snowfall that could potentially tip January 2023 into the number two slot for snowiest month on record — is expected early next week.

A look at 1949: The snowiest January on record

While January 2023 has been notably snowy for Flagstaff, it fails to approach the 104.8 inches accumulated during the same month in 1949.

There are, however, some similarities between the two years.

The pattern of frequent weather events in 2023 is “exactly what you could say happened in 1949 as well,” Roakes said. “It just added up and added up. There were only really two or three days [in January 1949] that there wasn’t significant snowfall.”

On Monday, Jan. 24, 1949, the Arizona Daily Sun headline read “January Snowfall Passes 7-Foot Mark,” while subsequent columns reported a state of emergency declaration alongside the closures of highways and schools. The first line of one such column described, with palpable exhaustion, the two feet that had fallen since Saturday before stating “The forecast calls for more snow today, tonight, and Tuesday.”

In the editions that followed, the Daily Sun reported on the unpassable roadways, ranchers unable to reach cattle through heavy snowdrifts and even snowfall in Tucson that caused brief cancellation in out-of-town deliveries of their newspaper. The Jan. 31, 1949 edition also reported the death of Williams man Steve Wilson, who succumbed to exposure while attempting to ski into town to retrieve food and provisions.

Curiously, the Jan. 25, 1949 edition reported that while the year’s snowfall was unmatched in the records kept since 1898, “we find that in 1895 an entry was made of 126 inches of snow in January.” It notes this entry is “unofficial” because it occurred three years prior to the establishment of the weather bureau in Flagstaff.

When it comes to the record breaking snowfall of January 1949, “It wasn’t just Arizona,” Roakes said. “It was Utah, Wyoming — widespread snowfall across the entire Western US”

Impacts were greatest on the northern plains where “The Blizzard of 1949” and subsequent storms produced monstrous snowdrifts. According to the NWS website, “Roads and railroads were blocked, so airplanes were used to bring food and medical supplies to isolated towns and hay to livestock.” Average wind speeds topped over 50 mph, with gusts in excess of 77 mph. Across South Dakota, Wyoming, Colorado and Nebraska, nearly 40 people died from weather exposure.