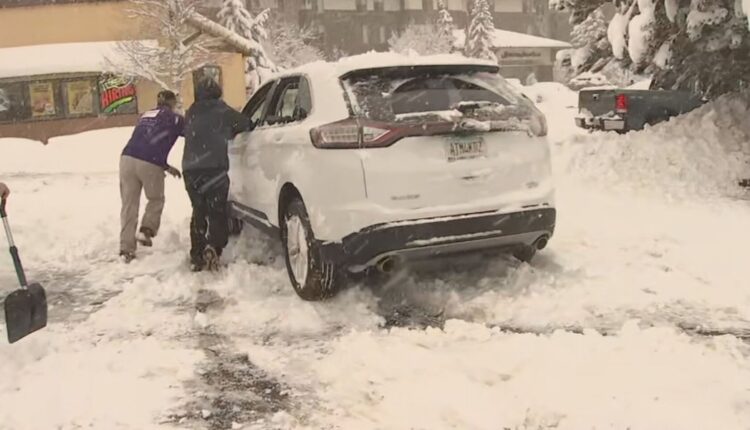 PHOENIX (3TV/CBS 5/AP) — Widespread winter storms in northern Arizona that brought record snowfall to Flagstaff over the weekend are stretching into Tuesday night.

As a First Alert Weather Day remains in effect, pockets of northern Arizona are likely to see more remnants of a low-pressure storm system, with snow levels dropping to about 4,000 feet, and leading to a Winter Storm Warning to remain in effect until November 11 pm on Tuesday. “A colder but third system will move through tonight into early tomorrow,” First Alert Meteorologist April Warneke reported early Tuesday.

ADOT is reporting several road closures due to inclement weather (last updated 8:15 am):

While the next system will likely be dry for the Valley, Warneke forecasts that it is likely to lead to the potential for another couple of inches of snow for those in Flagstaff. Another storm system is expected to move into northern Arizona Thursday night into Friday morning, causing colder-than-usual temperatures into the weekend.

Flagstaff saw just shy of 15 inches of snow on Sunday, breaking the previous daily snowfall record of about 9 inches set in 1978. Approximately 17 inches fell over the weekend in northern Arizona that whole weekend. Amid the storms, the Flagstaff Unified School District preemptively canceled classes on Tuesday. Coconino Community College and Northern Arizona University also canceled classes at their Flagstaff campuses.

Arizona’s Family reported snowpack levels are currently almost 200% above in the High Country. NWS Flagstaff Lead Meteorologist Brian Klimowski says it’s big news for our short-term drought outlook. “Even over the last month and a half, we’ve seen drought conditions at least in our southcentral portion of the state improve to where we’re not under any drought conditions,” Klimowski told Arizona’s family Elliott Polakoff.