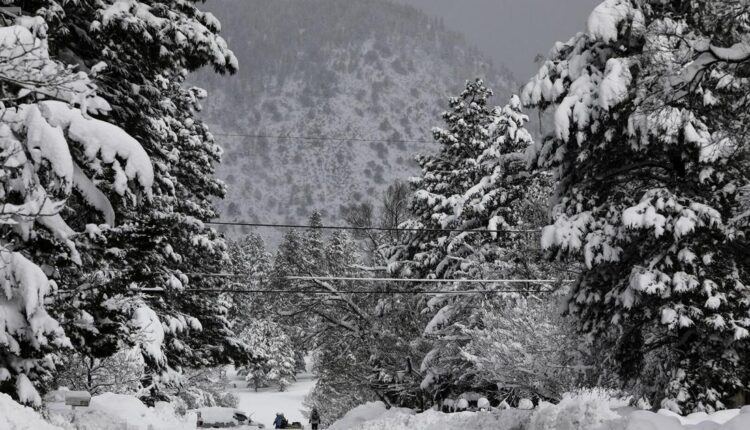 Just after 4:20 pm on Tuesday a call came into the Flagstaff Fire Department for an injury accident — and the patient was effectively snowed in.

A woman living near The Arboretum at Flagstaff had fallen at home and sustained a serious leg injury.

Despite the fact that Flagstaff fire engines are fitted with rear-wheel chains when facing snowy conditions, the challenge of dealing with a large amount of snow led first responders to opt for a different mode of transportation.

According to Crane, the person’s home was too far a distance from accessible roads to reach by foot, so the Coconino County Sheriff’s Search and Rescue Unit was called to assist.

Search and rescue deployed its snowcat, a fully tracked machine designed to tackle deep snow and transport up to eight people at a time if needed.

“This is heated. It actually has an opening where the driver and the navigator sit,” John Penna, a search and rescue volunteer, said when describing the interior of the vehicle. “There’s another couple of seats behind them, but there’s actually a hole that goes into the back that allows a litter to be brought in, and the EMT can sit right by the head of the patient and keep that communication going.”

Using the snowcat, first responders were able to get the patient who injured her leg to a waiting ambulance safely. According to Crane, the rescue took between nearly three hours.

“The patient was stable. Access was the biggest thing getting to her,” Crane said.

On other calls during the wild week of snowy weather, Crane said, firefighters had to shovel through deep snow to gain access to homes.

“It’s no fault of the city or county, they’ve done a great job, but there’s so much snow in such a small amount of time,” Crane said.

In addition to employing chains on fire engines, emergency responders also use four-wheel-drive ambulances. With the exception of more remote places — such as the home near The Arboretum at Flagstaff Crane mentioned — firefighters say they’ve been able to get where they need to be in the city limits.

When snow accumulation is a barrier, Crane said, teams don’t hesitate to call in reinforcements — such as search and rescue.

When firefighters during times of inclement weather are called to emergencies, it sounds a bit different than usual.

Ordinarily, first responders in the region operate using more than a dozen radio channels—often those channels are dedicated to specific purposes such as fires and emergency maintenance calls.

Damage to equipment on Mount Elden, a result of heavy snow, has posed communication challenges for firefighters.

“We had some radio problems,” Crane said. “In our immediate radio bank, we have 16 channels. Each one has a different purpose. It’s been limited down to three or four. We’ve lost three quarters of our channels. It started around two days of the storm. We were running all communications in the entire region off one or two channels. Right now there’s still some radio issues … we’re definitely not up to normal operations.”

“It hasn’t caused a delay in response or a delay in dispatch,” Crane said, explaining that there strategies have been in place to try to keep the channels from getting clogged when crashes or incidents happen at the same time. “We’ve just had to adapt quite a bit.”

When Crane spoke to the Arizona Daily Sun Wednesday morning, he’d just returned from a call — one of many since winter storms descended the area Saturday. A semitruck had skidded for more than 150 yards along a rail guard while attempting to stop on the freeway after the driver spotted another crash ahead. No one was injured in the incident.

“Right now what we’re seeing is the roads look clear and have some snowpack, so people aren’t really changing their speed. People are driving 75 miles per hour on the freeway,” Crane said, explaining that the semitruck incident happened on “black pavement” that looked clear from the driver’s seat.

Crane said drivers should reduce speeds on freeways, even where the blacktop is visible. He’s observed drivers failing to reduce speed or struggling to slow down when they see an emergency or crash ahead — compounding accidents.

“We went on three [calls] yesterday involving vehicles. Two of the three had secondary accidents because people were going too fast coming up on another accident,” Crane said.

Crane’s shift started Tuesday, and since then he said the department has been busy responding to slips, trips and falls on the ice as well as collisions.

As the snowfall lets up, another kind of concern has arisen.

“The one thing that we noticed is after these storms there’s oftentimes wind that’s associated with it. Snowdrifts will push snow near vent pipes on roofs. Because those vents aren’t venting properly, we’ve had a few CO calls because of the inability for those pipes to vent properly.” Crane said. “If you have the ability to, try and make sure those are clear. If not, have a professional get on your roof and clear it for you. If you’re in your house and feeling nauseous or have a headache with no obvious explanation, that’s a really good reason to call 911 so that we can come over and check CO levels.”

Carbon monoxide is a colorless, odorless and tasteless gas that can displace oxygen in the air. In addition to keeping an eye on your vents this winter,, Flagstaff firefighters also recommend having and maintaining a carbon monoxide detector in your home.