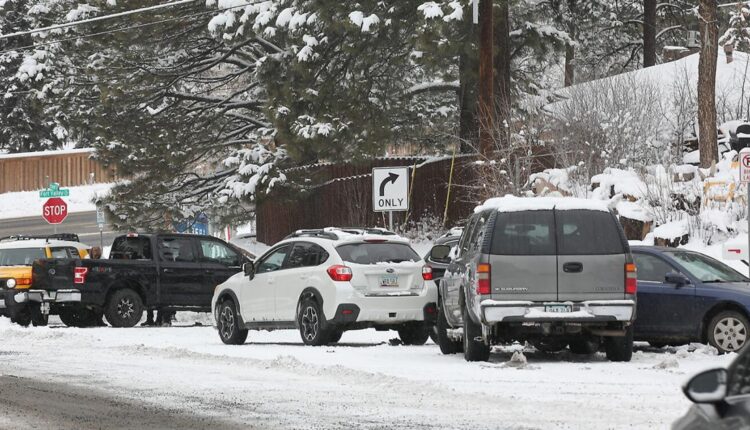 Rintala estimated an average of “maybe five to 10 a day for total traffic-related calls, let alone 21 for the morning.”

The uptick in traffic incidents was likely related to icy conditions following 1-3 inches of snow accumulation Monday night. In general, northern Arizona has accumulated about a foot of snow since January 1, said meteorologist Benji Johnson of the National Weather Service, with some areas topping over 20 inches.

Of the reported incidents, one of the most significant was a series of slide-offs near the intersection of Forest Avenue and Rim Road. Callers reported multiple vehicles “sliding either into the wreck or off the road to avoid it,” Rintala said. At 12:41 pm, FPD closed the road to avoid more incidents until it could be treated with cinders and reopened around 1:16.

There was reportedly a similar situation at the intersection of Fourth Street and Butler Avenue, Rintala said.

Road conditions were “very slippery,” said Flagstaff resident Becky Hawk-Bowles, who was involved in an accident on Falcon Road and Sparrow Avenue.

“I was rear-ended because the other vehicle couldn’t stop,” Hawk-Bowles said. “Other people on the road were sliding into each other’s cars. There were no cinders on the roads.”

The slick conditions were enough to send resident Katie King into a free-slide twice while traveling on Tuesday.

“I totally lost control,” King said. “All I could do was honk and put on my emergency lights. I don’t own an all-wheel-drive vehicle and am accepting donations.”

Snow play also became a concern for Kachina Village resident Katherine Miller as she attempted to commute on Tuesday.

“Coming home, I almost hit two kids who were unsupervised and sledding in the middle of the road,” Miller said. “The hill is dangerous and has windy turns that make it impossible to stop when there is snow.”

“Crews have been running full shift for almost nine days now, back to back, just with ice and snow,” Beckett said. While there were no internal delays in the streets department on Tuesday, Beckett noted that there was “a lot of traffic movement this morning around our shift change.”

“That always causes problems,” he said. “Especially when school does a two-hour delay. That puts their start time right in the middle of our shift change. It does make it difficult, but we try and catch up where we can.”

“That week between the holidays is usually pretty quiet in town and we definitely had everybody back in full force,” he said. “We try to remind people to take that abundance of caution on days where the road looks icy. We didn’t see as much of that caution today. We’ve been driving at it for a week now and kind of feeling strong. Today I think was a bit of a gut check for many people.”

Beckett encouraged the Flagstaff public to “give a little patience” to snow removal operations as they continue to clear secondary streets into Wednesday. He also expressed sympathy for the frustration that can be felt around inadvertent consequences of snow removal — such as the snow berms that can form at the base of driveways in the wake of a passing snowplow.

“We do apologize for that,” Beckett said. “But our goal is to keep the roads open, passable and safe.”

In addition to Tuesday’s snowfall, Flagstaff may see more icy conditions before the weekend.