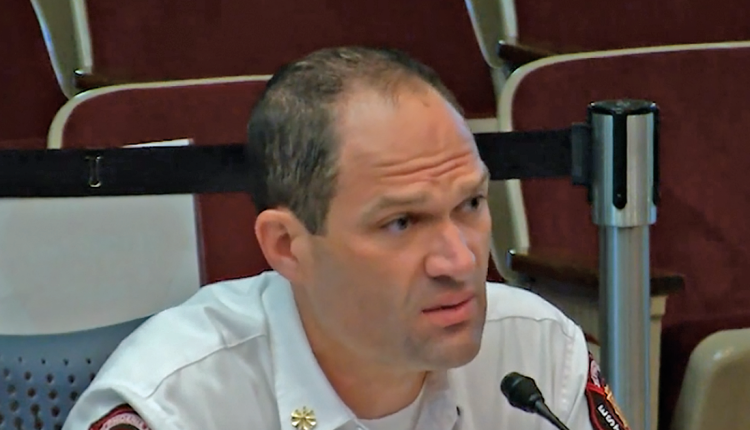 Whether they need firefighters or an ambulance, Phoenix residents and business owners on average are waiting nearly twice the amount of time that national standards set for a response.

Hammered by a soaring demand, staffing shortages and an insufficient number of fire stations, the Phoenix Fire Department’s fire engines, ladder trucks and ambulances on average take almost nine minutes to arrive at the scene 90% of the time.

The National Fire Protection Association for

acceptable response times to fire is 5 minutes and 20 seconds or less in 90% of calls for service, less than 5 minutes 90% of the time for ambulances.

In laying out the crisis in grim detail before City Council on Oct. 12, Fire Chief Mike Duran III and Assistant Fire Chief Tim Kreis didn’t mince words about the seriousness of their department’s plight—or the slim prospects for a quick or easy solution.

Neither is working well for Phoenix Fire and Kreis laid out the life-or-death consequences, telling Council:

“We know that it only takes a few minutes for an object in a room to ignite. That fire is going to spread and a phenomenon known as flashover will occur. Once flashover occurs, all of the folks inside of that building are endangered and the building is a danger as well.

“Time is also important in the delivery of emergency medical services because we know that it only takes about four to six minutes for a person to be without an effective heartbeat or not breathing before brain damage and death.”

The problem starts with Phoenix’s growth and then is compounded by the city’s failure to expand the infrastructure of fire stations to meet that growth, Kreis said.

That means a fire station may need to send men and equipment well beyond the boundaries of its normal service area to help another station in an emergency.

In Ahwatukee, Executive Fire Chief Scott Walker told the Village Planning Committee in June that response time to western Ahwatukee communities like Calabria and Promontory by the community’s only fire station at 4110 E. Chandler Blvd. is well beyond the acceptable 5-minute standard.

And that response time is expected to worsen with the addition of more than 1,050 single-family homes, 150 townhouses and 329 apartments in the coming Upper Canyon development along Chandler Boulevard between 19th and 27th avenues.

To illustrate the problem, County cited the busiest fire station in Phoenix – and Maricopa County.

In a 12-month period ending Sept. 31, he said, Fire Station 7 on E. Hatcher Road in north Phoenix responded to 5,894 calls for service. Of that total, the station missed 699 calls, forcing five stations farther away to respond.

The average response times to those 699 calls ranged from 10 minutes and 2 seconds in 195 incidents for one station to 8 minutes and 14 seconds for another station to respond to 47 others.

In all, 45 of the city’s 58 fire stations over a year’s time must deal with 4,000 overlapping 911 calls that are made within a single 24-hour period. Two years ago, 40 fire stations were hit by daily overlapping calls.

Further fueling the crisis is a soaring number of firefighter and paramedic absences in the last two years brought on by vacations, sick time and other reasons.

That also affects the availability of personnel to man fire trucks and ambulances.

Coupled with about 143 vacant positions, the rising number of absences has forced the city to implement a mandatory overtime rule affecting some 3,000 employees.

Barton in his memo told Council, “Since the program’s implementation, the Fire Department has utilized the plan over 50 times to maintain minimum emergency service delivery staffing requirements.”

Additionally, the department implemented a “brownout plan” in which stations that don’t have enough manpower on any given day are “unfortunately put out of service,” Kreis said.

“We’re in a bit of a pickle here,” he said. “This situation with activity levels and staffing – it’s not sustainable for us and we know that the city is continuing to grow.”

He said the department has a 20-year fire station construction plan and is “very hopeful” it will get the necessary funding from the $500 million bond issue the city may ask voters to approve next year. The department’s request faces stiff competition for cash from other city departments. (See related story).

But even if it got all the money it needs, Phoenix Fire faces still other problems in building new fire stations that are brought on by supply chain disruptions.

“Also very important for us is to evolve our service delivery model,” Duran said. “A lot of this is balancing the call volume with more resources but also looking at evolving into new types of resources.”

That will involve measures like shifting 911 calls involving mental crises to the new civilian Community Assistance Program unit that also will be handling similar calls to police.

Duran also said his department is talking with healthcare providers and other agencies to address health crises that would not require an ambulance by providing telehealth services.