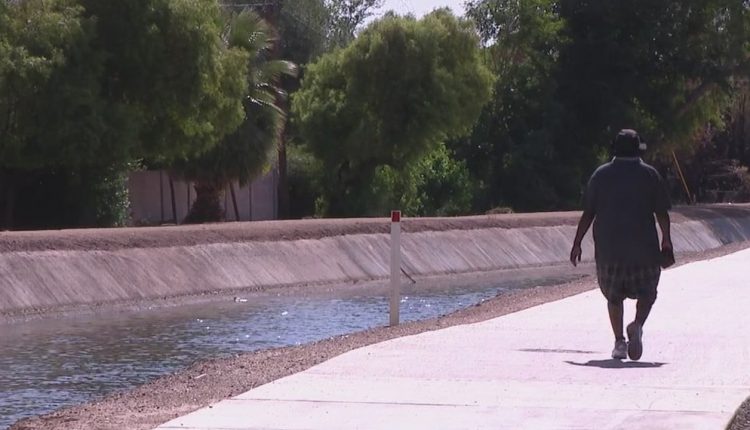 PHOENIX – Phoenix rescue crews have had several water rescues in just a day, and many of these people feel like they have no other way to cool down.

“It’s really hard to live out here. It’s 114, and it’s hard to breathe and people are dying,” a homeless woman said. “I’ve been going through a lot, and it’s not easy to be homeless out here.”

People on the streets are struggling to surviveespecially as Phoenix hit the hottest day of the year on July 11.

SO: Maricopa County heat deaths on the rise as blistering summer temperatures persist

Phoenix Fire Capt. Evan Gammage says many homeless people are doing whatever they can to cool down, and sometimes that means getting into bodies of water not meant for humans, like canals.

“Some of our most at-risk citizens here in our city, our homeless community, at times try to get into the canals to cool off on these extremely hot days,” he said.

However, Gammage says this is extremely dangerous, not only for the people getting into the canal but for the rescue crew members who have to get them out.

“Even though that water can look calm over the top, the undercurrent is much stronger,” Gammage said. “You have algae at the bottom of those canals and those steep slopes can make it very difficult for people to get in and out.”

The fire department has seen drownings and near-drownings. With the added safety threat for first responders, they’re pleading with the public to stay out of the canals, and so are local nonprofits.

“That’s not safe. That’s not where we want them to be. We’d love for them to be at the heat relief sites. Maricopa County has a list of them and they’re wonderful places with folks that are really interested in trying to help people stay cool,” a spokesperson for Circle the City said.

If you see someone in a canal, you’re asked to call 911 immediately.

More information on homeless resources in Arizona can be found here.

It’s a brutal time of year for people dealing with homelessness in the Valley. Shelter workers say when you see people looking for help, a small bag packed with essential supplies can really help. FOX 10’s Irene Snyder has more.

On July 11, the Salvation Army opened 11 heat relief stations throughout the Valley. Since May, the nonprofit provided relief for more than 18,000 people and given out more than 42,000 water bottles.

An upside-down body was found in a Phoenix lake on July 11 and it’s believed to be a man.

Maricopa County heat deaths, so far, stood at 7 caused directly by the heat, 6 related to the heat and a total of 92 deaths under investigation. Last year at this time, there were 9 deaths confirmed by the heat and 75 under investigation. With a 35% rise in homelessness in the area in the last two years, Marty Hames with Circle the City says a significant number of those deaths are homeless people.