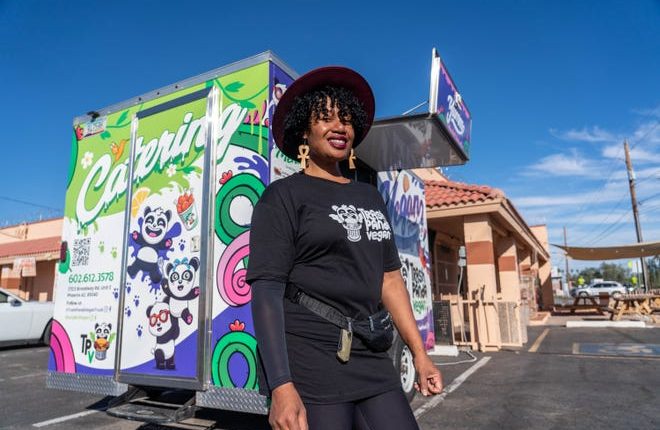 Krystal Mack’s first foray into cooking was making — and burning — a steak with grilled onions when she was five years old. And one of her earliest memories, she said, is of her mom making sauce: grinding up ingredients and smoking up the house with roasting chilis.

Growing up on the west side of Phoenix, Mack was exposed to a medley of culinary influences, constantly surrounded by the cooking of her Alabama native father, her Thai mother, her Japanese older sisters, and her friends from Mexico City.

Now based in south Phoenix, Mack runs a vegan food truck and eatery, and she’s expanding her cafe, Early Bird Vegan, to Tempe. The grand opening of this second location is scheduled for early November.

“I’ve always traveled outside of this area to get food for my family,” she said. “So we decided, why not have an eatery here.”

Before opening Early Bird Vegan off 17th Street and Broadway Road, Mack launched a food truck — Trash Panda Vegan — in April 2020. She wanted to build a loyal following that could sustain a brick-and-mortar location.

When the pandemic threatened her plan to bring the truck to events throughout the year, she improvised.

“Popping up at bars, big box stores, wherever our friends worked,” she said.

“It’s a splurge, it’s a festival-type deal,” she said of the truck, which continues to pop up at events across the city.

So when she opened Early Bird Vegan in November 2020, she focused on providing less-decadent options like smoothies, coffee, pastries, wellness shots, and sandwiches. Mack’s personal favorites on the menu include the sweet potato cake, the “Fakin Ehgg N Cheeze” sandwich, and the newest item, ribs, which she debuted at September Vegan Restaurant Week.

What drives Mack is “being able to teach the community, give people access to food like this,” she said. “This is something maybe they’ve seen on TV, or they’ve just heard people talking about vegan food, plant-based eating, and what that looks like.

Vegan with a Southern, Thai, French, and Southwestern twist

Before moving to Phoenix, Mack’s father was a senior master sergeant in the US Air Force. While he was in Thailand, he met Mack’s mother.

“Being the youngest of eight, I was often by myself,” Mack said. “There was a big age gap, and so I found myself just experimenting with cooking when I’d be home alone.”

Her first lessons in cooking came from observing her family.

While her father made Southern classics like cornbread, buttermilk, catfish, and gumbo, her mother rolled spring rolls on their floor and grew banana trees and bamboo in their backyard.

“We had a whole jungle,” Mack said. “All of Thailand was in our front and back yard.”

Every Christmas in her household was a feast. “We had the Southern-style cooking, Thai things as well, as well as the Japanese accompaniments, like Japanese fried rice,” she said.

And some of her favorite things to cook—as well as her love of Southwestern cooking—were inspired by days spent with friends, many of whom were from Mexico City.

“One of the first things that I wanted to learn how to make that I would find at their house was tamales,” she said.

After acing the general cooking and baking classes at Phoenix College and graduating from Glendale Community College, Mack attended the Le Cordon Blue College of Culinary Arts in Scottsdale, where she learned French cooking.

In addition to her eatery and food truck, Mack has a catering business that highlights her eclectic culinary background.

“My cooking style definitely has a Southern twist, it has a French twist to it, and definitely a Thai and Asian influence,” she said.

After culinary school, Mack found her way to a career as a personal chef for professional athletes. She worked primarily for NBA players and focused on healthy cooking.

Many of the athletes she cooked for lived near Camelback Mountain. She realized, as she was shopping for clients nearby their homes, that the grocery stores in her south Phoenix neighborhood “didn’t carry the same kind of products, or same quality products,” Mack said.

The concept for Early Bird Vegan was born when Mack realized she wanted to make an impact on her south Phoenix community through food.

When she opened her cafe, she kept many of the healthy principles she picked up as a personal chef. “We really care about what we are giving to the folks, what we’re having them put into their bodies,” Mack said.

She partners with local farms, using produce from the TigerMountain Foundation community garden, and provides 10% off discounts to anyone who works in the Roosevelt Elementary School District.

She hopes to continue to build community connections and is working on becoming a partner with Equality Health Foundation for their Blue Zones project, which aims to increase life expectancy in south Phoenix.

‘We just want to do more’: Giving back to the community

Early Bird Vegan has had its challenges, but support from the community has helped it thrive, Mack said.

When Mack was sick for months with COVID-19, a $10,000 grant from Raza Development Fund helped keep the cafe afloat. Through investments from customers and community members, Mack raised over $50,000 to help launch the forthcoming Tempe location of Early Bird Vegan. The investments came via a program called SMBX, which allows people to buy bonds to help a business expand.

The south Phoenix location is only 800 square feet and is “bursting at the seams,” Mack said. The small size limited the food offerings, she said.

But the new Tempe location, at Sonoran University of Health Sciences, will have double the square footage. Mack said she will be able to expand the menu and provide more options for the student and patient population.

“These folks are going to school to be naturopaths, so this aligns with that naturopathic work,” Mack said.

As she expands her reach across the Valley, Mack said she won’t forget what motivated her to open Early Bird Vegan in her south Phoenix neighborhood. She hopes the expansion will give her the capacity to grow her community partnerships and eventually accept electronic benefit transfer cards, used by people who receive food assistance from the government.

“I’m grateful and thankful to be able to provide this,” she said. “We just want to do more.”

Do you have an inspiring neighbor, colleague or friend you think should be featured in Faces of Arizona? Let us know by filling out this form.

Madeleine Parrish covers south Phoenix for The Arizona Republic. Reach her at [email protected] and follow her on Twitter @maddieparrish61.

Ready or not (my journey to my first 55K)