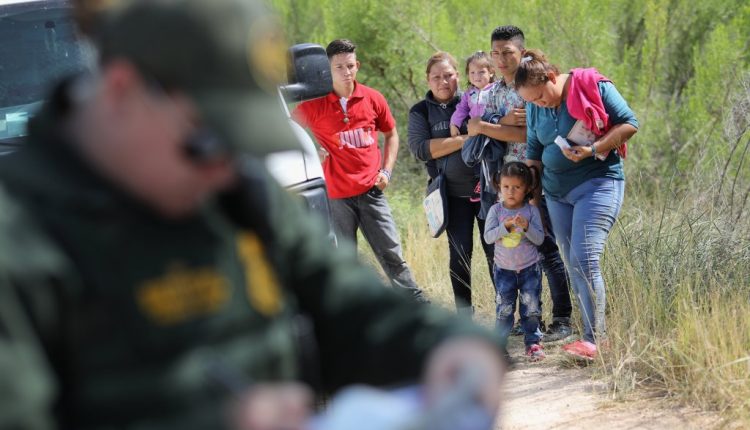 WASHINGTON – Border officials encountered a record of almost 2.4 million migrants at the southern border in fiscal 2022, shattering the old record of 1.7 million set just a year earlier, according to numbers released late Friday by Customs and Border Protection.

Experts said factors behind the increase are “incredibly complicated” and are partly due to the same migrants being repeatedly turned away and stopped again. But critics say the reason is simple – Biden administration policies are encouraging migration.

A CBP official said Monday that the agency would not comment on the numbers.

Alex Miller, director of the Immigration Justice Campaign, an immigration advocacy initiative, said that no one reason is responsible for the increase in migration.

But Andrew Arthur, resident fellow in law and policy at the Center for Immigration Studies, blamed the Biden administration’s decision to abandon Trump-era policies like the “remain in Mexico” program that turned asylum-seekers back at the border to wait for a hearing. Biden campaigned against the policy and his administration is currently working to phase it out.

“The Biden administration has rejected any policy in which it would deter foreign nationals from entering the United States,” Arthur said. “The main deterrence tools are detention, and the White House is asking for fewer detention beds in the 2023 budget, or prosecuting foreign nationals for entering the United States illegally … and prosecutions for illegal entries have plummeted under the Biden administration.”

Arthur said it is another example of the administration distancing itself from the longtime policy of “prevention through deterrence,” introduced and enacted in CBP’s “Border Patrol Strategic Plan 1994 and Beyond” with the goal of slowing deterring migrants.

Critics say deterrence policies create humanitarian crises, while failing to achieve the stated goal of keeping migrants from making the trip to the U.S. in the first place.

Homeland Security Secretary Alejandro Mayorkas has said as much, arguing when he announced the end of the remain in Mexico policy that it had “endemic flaws, imposes unjustifiable human costs, and pulls resources and personnel away from other priority efforts to secure our border.”

Miller said that instead of trying to deter migrants, the U.S. should be funneling them toward ports of entry, not away.

“That’s where you have robust infrastructure with Customs Border Protection to process individuals and to screen them for asylum and make determinations about whether they should move forward in immigration proceedings,” Miller said. “Instead, when the ports are closed, they (migrants) are forced to cross the desert, cross the rivers, cross the wall – which puts them in precarious circumstances.”

While ports of entry in the Tucson sector of the border have been a “key route” for Mexican immigrants in the past, it is now also used heavily by Guatemalans, said Ariel G. Ruiz Soto, policy analyst for Migration Policy Institute, a nonpartisan immigration-focused think tank.

Ruiz Soto said that the Yuma sector of the border is seeing a much more diverse flow of people, with Cubans, Colombians and Venezuelans making up the majority of those moving through the sector. He said the key reason for the uptick in migration from those countries “is the compounding and long-lasting economic effects of political repression” back home.

“It has affected not just the viability of a prosperous livelihood in these countries, but also has in some ways cemented negative perspectives of what will happen in the future in these three countries,” Ruiz Soto said.

While he said the overall number could be misleading, it would be wrong to ignore it.

“The overly focused statistics on the 2.4 million is really just the tip of the iceberg,” Ruiz Soto said. “We are going to see some increase in the future but they are not sustainable.”

Miller agreed that it would be wrong to put too much stock in the total number of migrants encountered in fiscal 2022, since many people caught under Title 42 have been encountered multiple times. While that “doesn’t account for all of the change” in the numbers for fiscal 2022, she said it has helped inflate them.

“The most important thing to remember is the humanity of all of the people that are being encountered at the border,” Miller said. “These exclusionary policies that push people back into Mexico without due process do exactly that. We are sending people to harm, many of whom really need help. We can do better than that.”