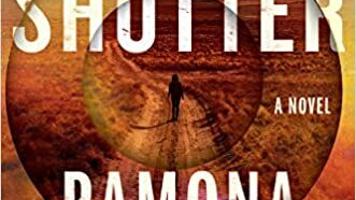 Spooky books for the Halloween season in Tucson

Special to the Arizona Daily Star

As we approach Halloween, “dark-and-stormy-night stories” will begin dotting TV listings and theater marquees. On a real dark and stormy night, though, nothing beats a good, dark novel.

Through the years, we’ve been drawn to such classics as “Dr. Jekyll and Mr Hyde,” “Frankenstein,” and almost everything by Stephen King. We all have one we remember, or now want to read, and volunteers with the Tucson Festival of Books were happy to provide their own sampler of spooky book suggestions this year:

“Shutter” by Ramona Emerson. Rita is a forensic photographer in Albuquerque whose photos have cracked many a case, but she has a secret: She sees the ghosts of crime victims and they point her to the overlooked clues. This chilling debut is set in the Navajo Nation. — Lindy Mullinax

“Her Body and Other Parties” by Carmen Maria Machado is a collection of short stories that offers startling looks at the reality of women’s lives and the violence that sometimes comes with it. This was Machado’s first book, and in it she takes the reader from horrific violence to deep sentimentality. — Anne Spieth

“The Ghost Writer” by Robert Harris was published several years ago, but it remains vivid in the memory of those who read it. It features a ghostwriter hired by a controversial British politician now living in exile in the US The ghostwriter is thrilled by the large advance, but soon wishes he’d turned it down. — Thea Chalow

“Cemetery Boys” by Aiden Thomas is a story about Adriel, whose Latino family refuses to acknowledge his sexuality. To prove himself, he persuades his cousin to help him perform a sacred ritual. Imagine his surprise when learning he had summoned the ghost of a classmate who didn’t even know he was dead. — Emily Walsh

“Creepy Carrots” by Aaron Reynolds. Published in 2012, this children’s picture book has been a go-to choice at Halloween ever since. Jasper Rabbit loves carrots. He eats them all the time — until carrots start following him wherever he goes. — Brenda Viner

“Our Day of the Dead Celebration” by Ana Aranda is a joyful introduction to Día de los Muertos through a family’s preparations for the day. They go to the market, arrange the ofrenda, make tasty treats and decorate sugar skulls. The bright, festive illustrations in this picture book depict a family honoring their living and dead relatives with food and family stories. Inspired by Aranda’s own family in Mexico, her book conveys the importance of learning and preserving family memories. — Kathy Short

“Sleeping Beauties Vol. 2” by Stephen and Owen King is a graphic novel that completes the bestseller King and King first released in 2017. In it, a mysterious virus covers the world. It primarily affects women, sending them into a strange, utopic, dream world. The younger member of the father-son team will be at the Tucson Festival of Books in March. — Lynn Wiese Sneyd

“The Exorcist” by William Peter Blatty was published more than 50 years ago, but it remains one of the most haunting novels of all time. What made it particularly chill-worthy was that it was based on fact, on a young girl who was seemingly possessed by the devil. Purposely raw and profane, it is not for the faint of heart. But if you’re looking for a chiller this Halloween season… — Bill

“Dining With the Dead” by Mariana Nuño Ruiz and Ian McEnroe is a beautiful cookbook from Rio Nuevo Press. Ruiz is a well-known Mexican chef. Here, she presents a variety of menu options for families and friends celebrating the Day of the Dead. — Margie Farmer

“What the Hex” by Alexis Daria is a romance novel that, in the words of one reviewer, “brings the Addams Family to Miami.” When Catalina comes to Florida for her older sister’s wedding, she learns the groom-to-be has been possessed by the devil. So has almost everyone there. It’s not a scene-setter that normally leads to romance, but trust us, we get there. — Jessica Pryde

“The Haunting of Hill House” by Shirley Jackson has been called the best haunted house story ever. It later evolved into a 10-part series on Netflix. It begins with a scholar and three others arriving to explore a house some had described as haunted. At first, the scares are interesting. Then the house appears bent on turning them lethal. — Shannon Baker

Keep current with news from the Tucson Festival of Books by visiting TucsonFestivalOfBooks.org