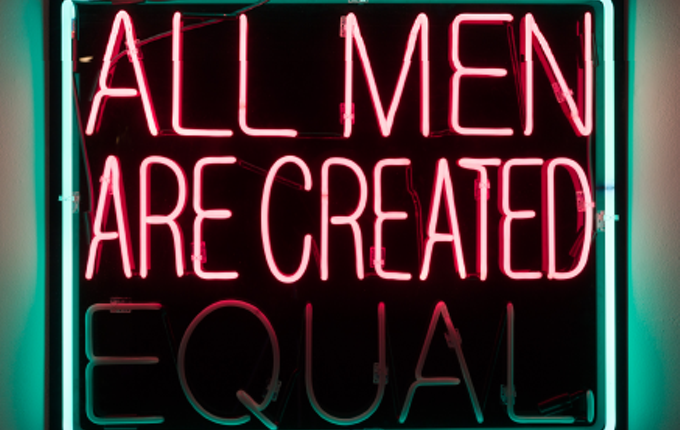 Patrick Martinez’s subversive, narrative work will be at the Tucson Museum of Art through April 24.

The Center for Creative Photography opens up the spring with a riveting show about trees. The poetically named exhibition, Trees Stir in Their Leaves, not only displays stunning photos by the likes of Ansel Adams and Lola Alvarez Bravo: it also brings in fragments of real trees in installations created by scientists from the UA’s renowned Laboratory of Tree-Ring Research . The show’s merger of science and art reminds us how much the world needs trees, both for their beauty and for their ability to cool down a world that’s heating up places like Tucson and elsewhere, doing their part to lessen climate change. Visitors can walk across campus to see the Tree-Ring lab and also take a self-guided outdoor tour of the trees in the university’s fabulous campus arboretum. ThroughJuly 23.

The campus museum’s popular show The Art of Food has been going strong for months. You can see more than 100 artworks by 20th- and 21st-century artists like Andy Warhol (look for his big art banana) and other famous contemporary artists. Show ends March 20. But now the exhibition has been refreshed by two new mini-shows, running through April 23, that take on local food scarcity and poverty. Voices: Real Stories of Hunger and Hope, put together by the Community Food Bank of Southern Arizona, document “hardships and triumphs.” A rising local photog, Kathleen Dreier, embarked on her Tucson Stories shortly after the murder of George Floyd. In her photo essays, people tell their own stories of struggle and success. EXTRA: Shana Klein, an art history professor at Kent State, gives a lecture, Hard to Swallow: The Racist Messages Behind American Images of Fruit. Tuesday, Feb. 24, 5:30 am, at the Center for Creative Photography. artmuseum.arizona.edu

There is less than a month to see MOCA’s Were-:Nenetech Forms, a group show about “migration, transformation and survival in the Sonoran Desert.” Steered by LA artists Rafa Esparza and Timo Fahler, the team of artists has been making traditional adobe bricks and using them to build new architectural structures, framed by earth. The show’s title alludes to the Indigenous peoples of Mexico who built with adobe: the Nahuatl word “nenetech” translates as “close together.” A treat is work by the late Ana Mendieta (1948-1985), revered for outdoor art of the body; she often placed her own body into sand and dirt, returning herself to the earth. Closes on March 13. Next up in the Great Hall will be work by painter Grace Rosario Perkins, April 2 to Sept. 1. moca-tucson.org/exhibitions/

The museum has long hoped to mount a show for artist Brad Kahlhamer; it will finally happen this spring. On March 17, the Tucson-born artist—born to indigenous parents and adopted by a German American family—will open his solo show “11:59 to Tucson.”
He doesn’t know the full story of his life. “Longing for his Indigenous roots,” curators write, Kahlhamer makes paintings that are a “blend of dreams and nightmares.” These days he lives in New York and Mesa, and creates urban scenes, southwest fantasies and personal narratives. March 17 through Sept. 25. Several of TMA’s winter hits are still on the museum’s walls—and floors. Olivier Mosset’s super-abstract art is up until Feb. 27. Look What You Created will show Patrick Martinez’s narrative work through April 24.
tucsonmuseumofart.org

The latest exhibition at this far east museum is Sacred Dancers: Ceremonial Navajo Weaving. The show’s beautiful cloths, picturing images of sacred beings dancing, weave an interesting tale. Navajo people believed it was wrong, if not dangerous, to make images of the Yeis, the Navajo Holy People. But tourists arriving in the early 1900s were eager to buy, and, according to the museum, weavers eventually found a solution. While remaining reverent, they began to weave rugs that were artistic rather than “accurate replicas of religious imagery.” The show features works by a number of weavers who “portrayed ceremonial imagery.” Through June 22. Tucsondart.org

The museum continues with Wrapped in Color: Legacies of the Mexican Serape. This must-see show has glorious textiles from days past and present. Part of the story is Porfirio Gutiérrez, a Zapotec textile artist who is teaching a new generation to preserve the art of making Saltillo sarapes. ThroughJuly. Across the hallway is another blockbuster, this one about photography. The title says it all: Saving An American Treasure: An Unparalleled Collection of Anthropological Photographs. ongoing.
statemuseum.arizona.edu

Local artists Teresa Estrella and Rudy Flores make Tucsonans small. Literally. In their Army Man Project Vol. 2, the pair used 3D printing to create tiny figures that look just like their real-life models. These 3.25 inch creatures are army green, the same color as the miniatures army soldiers my older brother used to play with. Go on in and see portrait figures of 187 of your fellow Tucsonans. Or arrange to get a teeny statue of yourself. Through June 5. theminitimemachine.org

Migrants keep on dying horrible deaths in the Sonoran Desert. Many bodies are never identified and some are never found. Los Desconocidos (The Strangers): The Migrant Project aims to remember these dead. At the museum, the wall is filled with hand-sewn quilts made by project volunteers, and embroidered with the names of the lost and illustrating their story. One quilt honors all the migrants known to have died in 2019-2020 in the Tucson sector. Their names border the frame; inside is an image of a family eyeing the dangerous mountains and desert ahead.
Through Feb. 28, 2023. Arizonahistoricalsocity.org

U.S. House hearing on extremism toward minorities turns into ‘defund the police’ debate