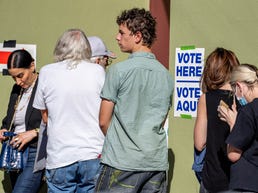 Stack Infrastructure said it has purchased land south of Loop 202 near 40th Street and plans to construct five buildings that will house computers, telecommunications equipment, back-up systems and other components for business clients.

The complex will add 230 megawatts of capacity and thus would be larger than an existing, 150-megawatt data-center complex the privately held company already has developed in the West Valley city of Avondale.

Stack didn’t name any current or potential customers for the facility but said it caters to some of the world’s most innovative companies, with demand for data-center services growing rapidly.

The proposed 1.7 million square-foot campus will include a low-water use design, Stack said, without elaborating. The campus will feature a dedicated on-site power substation, allowing it to run entirely on renewable energy including solar.

“Capitalizing on the abundant growth opportunities in the Phoenix area offers our clients the utmost scalability and flexibility while being highly cost-effective and embracing renewable energy resources,” said Brian Cox, CEO of Stack Americas, in a prepared statement.

With the new campus, he added, the company is “anticipating the needs of our clients and staying ahead of the curve in the industry by quickly delivering significant added hyperscale capacity.”

The company described Arizona as attractive for data centers owing to its proximity to California clients, access to renewable energy, relative lack of natural disaster risks and for other reasons.

Stack (stackinfra.com) offers data-center services across the nation and in various foreign countries including Germany, South Korea and Australia.

The company has nearly finalized its designs for the complex near the airport and intends to apply for permits soon, a spokeswoman said. Stack plans to begin start construction in the first half of 2023. The company didn’t reveal any hiring goals for the new complex, and the company’s website doesn’t list any open positions here.

Stack’s other Phoenix-area campus, a 150-megawatt facility on 80 acres, is located at the corner of W. Lower Buckeye Road and Litchfield Road and caters to hyperscale, cloud and enterprise clients.