A renovated and improved Stalker Lake near Wray will soon be reopening for fishing.
After months of hard work, contractor JHL completed work on the dam in Stalker last week.

They replaced the entire outlet structure and put a liner in the outlet pipe to prevent it from leaking and possibly failing. The cracked concrete along the dam surface has also been removed and replaced along with a number of other improvements. The project was funded from the Colorado Parks and Wildlife budget.
While the lake was being drained for this work, Colorado Parks and Wildlife staff took the opportunity to improve fishing access and fish habitat. 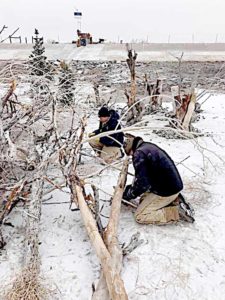 The local Colorado Parks and Wildlife staff improved the fish habitat on the lake floor while Stalker Lake was empty. (Courtesy photo)
Sediments from the lake were used to create two 100 by 30 foot and two 50 by 30 foot piers to improve coastal access to deeper areas of the lake.
Sediment has also been removed from the boat ramp bay to make launching boats deeper and easier.
All the jetties and the south coast at the boat ramp were covered with concrete rip rap to prevent erosion and create habitat.
A path was laid along the south side, on which a handicapped-accessible sidewalk is to be installed in the future. Josh Melby, parks and wildlife officer, reported that several grants are being prepared to fund further improvements.
Three gravel spawning beds and 60 piles of brushes were added throughout the lake to improve the habitat, while the piles of brushes on the boat ramp were removed.
Once the lake is full, a longer boat dock is added along the boat ramp.
The lake is filling up and should be full in early March. CPW plans to bring the fish back into the lake in March or early April, depending on the weather and water conditions.
Melby reported that it should be ready to fish in spring and summer.
The project was originally scheduled to take place in 2019 and will focus on the mandatory repairs to the Chief Creek Dam, which forms Stalker Lake. The outlet structure was nearing the end of its life. However, the project was postponed for a year to give the CPW time to raise funds to improve the habitat and facilities.
The work done during the drainage in the bottom of the lake should greatly improve long-term fisheries on the lake.
Stalker Lake is considered to be one of the best bass and sunfish fisheries in the state.