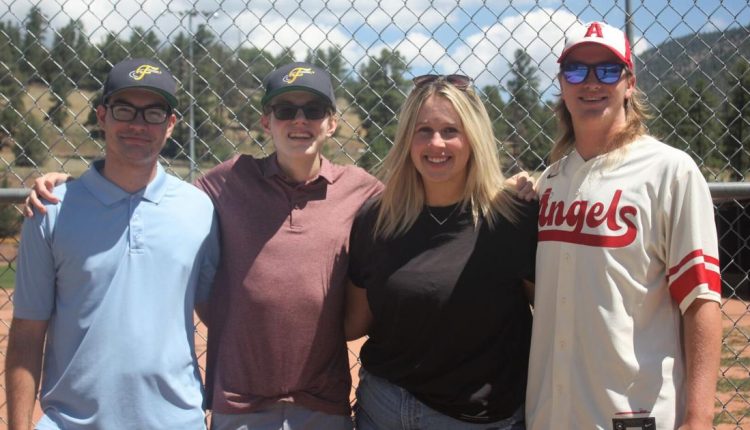 The Flagstaff Star Chasers’ main goal is to develop its athletes over the summer ahead of their various college seasons and eventually post-academic careers.

“Some of these guys have their foot in the door at a school. But a lot of them are still trying to get better, get their name out there in the transfer portal or — for some of the junior college guys — getting to that next spot,” said Northern Arizona University student and team intern Brenden Martin .

“It’s different, but I feel like it’s helping me as much as it’s helping them,” added fellow intern and Northern Arizona student Lindsey Ridgway.

Martin and co-intern and Northern Arizona classmate Michael Manny provide live game calls and a short post-game show of each of the team’s home contests. Ridgway works on the live stream, takes stats, photographs games and works on the website, with a few other various roles thrown in. Jake Anderson, the lone noncommunications student of the four interns, runs operations during the game, such as PA, working the scoreboard, music and more.

Each is on the ground level of providing a broadcast and quality in-game experience in the team’s first season. The goal is to gain experience, not unlike the players and coaches for the Star Chasers. Hopefully, they believe, the time spent will pay off with a foot in the door for jobs in the future.

As such, they have the distinction of being the team’s first-ever interns for the only collegiate baseball team in Flagstaff.

“I heard ‘summer college baseball’ and that was all I needed,” Manny said.

“Just the fact that it’s something different, not something you see a lot here because there isn’t another team at this level in town,” Martin added.

The games are regularly streamed on the GameChanger smartphone app, with live commentary and stats. When the season started, games were shown on Facebook and difficult for potential viewers to watch. It was one of a few challenges that any new group might expect.

But now, with a solid, consistent plan for games and a working concept for how to manage each day, there was a lot to be gained from learning from step one.

“It was literally ground zero. We were in charge of the PA, stats, live streaming, everything like that. I have done it for a college sports team before this, where it was already set up for me. Now I have a whole new respect for it, and I feel like I know from the first step of what I need to do for a job in the future,” Ridgway said.

Anderson, who wants to be a sports agent following his time at Northern Arizona, feels similarly.

“It’s been interesting, for sure, because, like Lindsey said, it’s a whole different feeling. I’m getting experience with a startup team, doing all these different roles, so that I understand them when I move on,” he said.

And even for Manny and Martin, who have already called several baseball games — including a few at Coconino High School, which has served as home for the Star Chasers all summer — the internship gives them more consistent practice.

“A lot of times would be one or two games in a week max, split between a few people, so you’re doing less innings. With this, you’re getting reps every single day and it builds confidence,” Manny said.

And while the experience is one that each of the four feel they have benefited from, they also have realized they are providing a service for the players and their families.

Athletes traveled to Flagstaff from around the country this summer — one even hails from Japan — and many are in small towns or compete for schools that do not garner much media attention. The players succeeding for Flagstaff now have regular clips of them playing well and believe they gain exposure at a higher level.

Roberto Garza-Nunez, one of the Star Chasers’ top hitters, walked off a game during the season and was featured on the post-game show for a quick interview. Manny remembers Garza-Nunez’s family responding well and showing appreciation.

“His parents came up to me and were like, ‘Thanks for having our son on the show. You all do such a great job,’ and that really meant a lot to me,” he said.