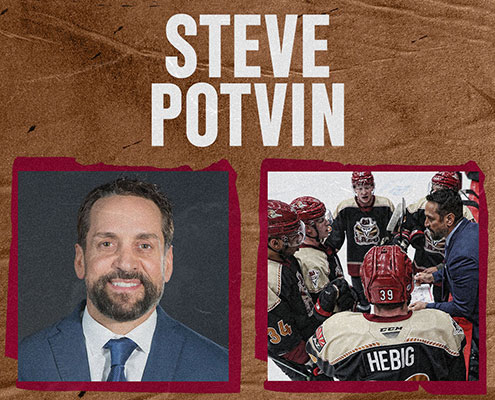 Tucson, Ariz – The Tucson Roadrunners, the American Hockey League affiliate of the Arizona Coyotes, announced today that Steve Potvin has been named the team’s head coach.

Potvin will be formally introduced Thursday at 1:30 pm in a press conference at Tucson Arena in the Grand Lobby. The press conference is open to the public. Media and fans are invited to park in Lot B and to enter the building at the circle between Lots B and C.

“Steve is a very good coach who has great familiarity with our players in Tucson. He has done a tremendous job developing our prospects the past six seasons and we are thrilled to name him as our head coach with the Roadrunners.”

“Steve proved two seasons ago that he could lead the Roadrunners behind the bench. He continues to make strides as a head coach and provides internal continuity for our organization. He is absolutely the right candidate at the right time to lead the Tucson Roadrunners now and into the future.”

As Roadrunners assistant coach, the team captured Pacific Division Championships during the 2017-2018 and 2019-2020 seasons with Potvin behind the bench. In addition, 20 Roadrunners have made their NHL debuts with the Coyotes since he joined the Tucson staff; including eight in 2021-2022 and four during the 2020-2021 season. During the 2021-2022 season, Tucson’s power-play, under the direction of Potvin, set a team record by converting on 21.5-percent of their chances and finishing seventh in the 31-team American Hockey League in that department. The 2019-2020 Roadrunners finished fourth in the league in goals-per-game at 3.41 and featured three of the league’s top 15 scorers under Potvin’s direction of the forwards.

“I am beyond appreciative for the opportunity to once again lead the Roadrunners. Our staff is looking forward to every challenge with the determination to grow, develop and win.”

The Montreal, QC native joined the Coyotes staff after a 16-year professional career that included 478 professional AHL and top European league games before retiring in 2009-2010 after a season with the Central Hockey League’s Arizona Sundogs in Prescott Valley. The former forward registered 31-44-75 in 158 career AHL contests. Potvin also collected 133 goals and 184 assists in 350 games over 10 seasons in Europe.

Steve and his wife Nada have called Arizona home for over 13 years with their three children Max, Nash and Eliana.