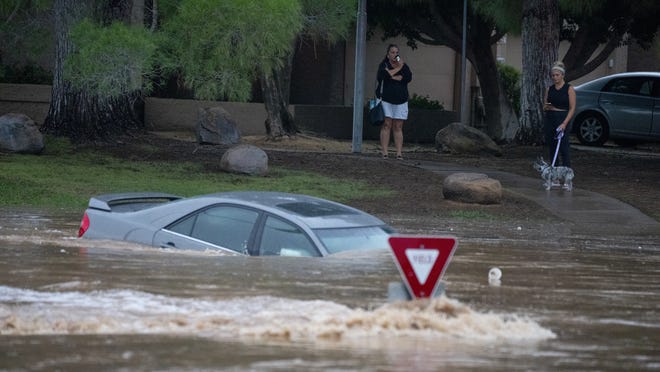 Friday has been filled with ever-changing monsoon-related watches and warnings across Arizona from the National Weather Service.

Near Phoenix, the National Weather Service had issued a severe thunderstorm warning, the bounds of which include parts of Scottsdale, Anthem and Cave Creek, lasting until 4:15 pm Friday.

Weather Service meteorologist Jared Heil said anyone who gets caught in a dust storm while on the highway should pull off the roadway early, long before the dust storm reaches its worst visibility.

“If you see the dust storm ahead of you, safely pull off the roadway as soon as possible,” Heil said. He advised people to pull all the way off the highway, not stopping in the emergency lane, and to come to a complete stop, turning all car lights off and taking their foot off the brake, putting the parking brake on instead.

Heil said there is a severe thunderstorm near Scottsdale that is “slowly moving to the west,” which means more flash flood warnings could be possible Friday going into the evening. The thunderstorm is expected to produce a significant amount of rain, up to 4 inches an hour, and strong gusts of wind up to 65 miles per hour, as well as hail in some areas, Heil said.

Heil advised those near Interstate 17 and parts west of it where the weather may not be severe yet to “watch the skies,” as changes in weather could occur suddenly and “go downhill in a hurry.”

As the thunderstorm slowly moves west, the Phoenix area has experienced 13 power outages as of 4:30 pm, with five of those outages affecting over 1,000 people, according to Arizona Public Service’s outage map. In all, over 5,000 people have been affected by power outages.

Northern Arizona is experiencing heavy rain, with another thunderstorm slowly moving across Flagstaff, National Weather Service radar shows. A briefing from the Flagstaff office said Northern Arizona is at an elevated risk for flooding due to saturated soils in the area.

Tucson is forecast to have some thunderstorms into the evening, according to the National Weather Service’s Tucson office.

The National Weather Service is forecasting thunderstorms all through next week throughout Arizona.