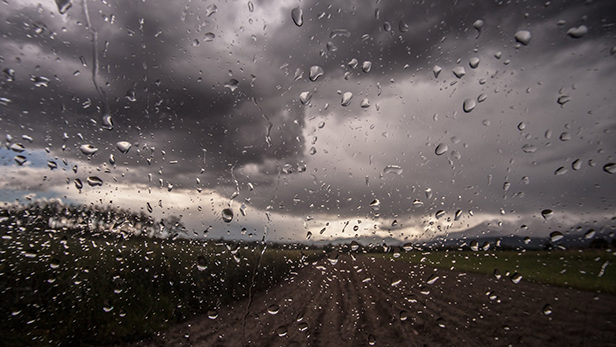 PHOENIX — The year started off wet and cold as a strong storm system made its way across Phoenix on Sunday.

Much of the Valley recorded over a quarter of an inch of rain by 7:30 pm, while the East Valley had higher amounts of rainfall.

Rain gauges in Mesa, Gilbert, Chandler and Queen Creek recorded more than half an inch of rain, according to the Flood Control District of Maricopa County. The National Weather Service Phoenix advised residents in the East Valley to seek shelter amid thunderstorms with hail through 8:15 pm Sunday night.

A flash flood warning was issued for Maricopa and Pinal counties at 5:35 pm until 9:45 pm by NWS Phoenix. Heavy rainfall near Tortilla Flat resulted in a three-foot rise of Fish Creek in the area.

Just west of Maricopa, the westbound lanes on State Route 238 at milepost 42 closed due to flooding, according to the Arizona Department of Transportation.

In the West Valley by Westgate Entertainment District, nearly 900 people were without power, according to SRP. The cause of the outage is under investigation.

More rain is expected to come, potentially bringing in gusty winds that could reach up to 30 mph.

Rain chances in Phoenix continue into the week with a 30% likelihood of precipitation on Monday morning and in the evening.

Meanwhile, a winter storm advisory is in effect in Flagstaff until 8 am Monday, as the area could see a total daytime snow accumulation of 3 to 5 inches, according to the National Weather Service in Flagstaff.

Rain showers were forecast to turn into snow after 1 pm, with the possibility of patchy blowing dust after 3 pm Wind gusts could reach up to 34 mph, according to NWS.

There were also a few highway closures north of Phoenix due to winter weather conditions.

Chances for snow showers in Flagstaff begin strong at the start of the week before dimming down Wednesday through Friday.

A woman was struck, killed in Phoenix car crash on New Year’s Eve