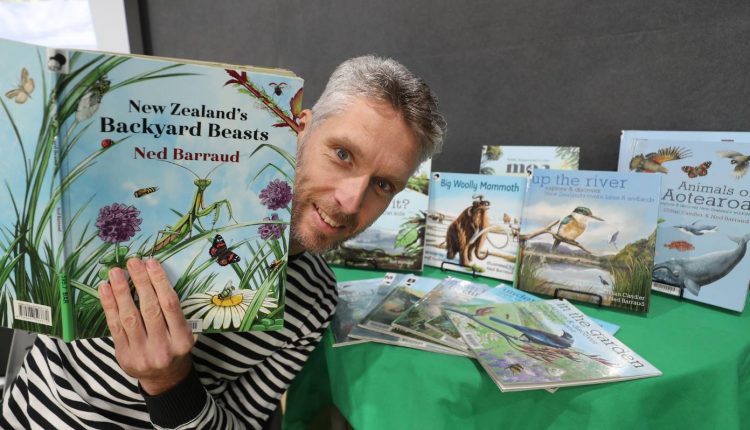 Wellington illustrator and writer Ned Barraud was on the Storylines National Story Tour at the Timaru District Library on Monday.

Young fans of author and illustrator Ned Barraud’s books about wildlife and insects were thrilled to meet him in real life.

The Wellington-based writer and artist embarked on his first personal Storylines National Story Tour answering questions from school children about his 16 books in South Canterbury on Monday.

Seven tours with different authors and illustrators, nominated each year to introduce New Zealand literature to young people all year round, take part in a tour of different regions of the country.

Barraud travels to 15 schools and libraries in South Canterbury and North Otago for a week, chatting with writers David Riley and Susan Brocker and illustrator Giselle Clarkson.

Last year Barraud took a virtual tour due to Covid-19 but this is his first live tour.

He has spoken at Pleasant Point Primary School, the Sacred Heart School in Timaru, and the Timaru District Library, attended by students from Beaconsfield School. The illustrator explained what inspires him, how to create reference pictures, drawings and a book.

“The most common question asked is how old am I?”

The other popular question is what is his favorite insect.

“My favorite is a praying mantis, she has sass and catches flies out of the air. You can see 360 ​​degrees. “

His books on insects, mammoths and birds are popular with children. A book he finished last year on moas intrigued them because they didn’t know there were nine types of all shapes and sizes, he said.

Barraud works on his illustrations from his Wellington home and looks after his three children while his wife runs a construction company.

Anita Dawson, director of the children’s library at Timaru District Library, said the tour was a wonderful opportunity for young people, respected authors and illustrators to meet.

The five day tour will also include Geraldine, Temuka, Kurow Omarama and the Mackenzie before ending on Friday.

Storylines tours are funded by Creative NZ and other funders and are free for schools, early childhood education, libraries, and community groups.