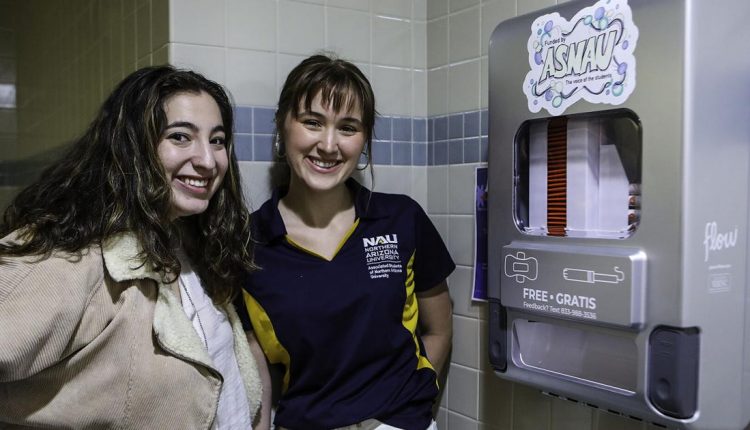 Northern Arizona University’s PERIOD. Club and Women’s Health Committee (WHC) are bringing free menstrual products to the university after recently securing funding to install dispensers in restrooms across campus. The first 14 were put into the University Union over winter break.

The dispensers will be installed in phases, with a planned total of 184 across women’s and gender-neutral restrooms in student-focused buildings on campus. The Associated Students of NAU (ASNAU) has provided $30,000 to the initiative, covering the purchase of dispensers as well as installation, service and shipping.

NAU’s administration, meanwhile, is allotting $50,000 each year for products and upkeep of the dispensers.

“I had no idea,” Sydney Rocks, PERIOD. Club president, said of the progress made. “Beginning on campus, we all thought [we’ll] get a foot in the door, maybe we’ll be able to start the idea of ​​getting period products on campus. But now it’s like, ‘No, this is going to happen.'”

She added: “I was just shocked and so amazed by it.”

The initiative started with $300 and four members of WHC and PERIOD. Club who had approval to access nine gender-neutral restrooms in residence halls across campus.

“We put packages that had about the amount of products you would use in the average menstrual cycle,” Kinsey Kavanagh, WHC founder and vice president of student affairs said. “That number was a little light…but we worked with what we had and that amount became slightly overwhelming. We couldn’t keep up with the amount that needed to be stocked. Budget-wise, we weren’t going to be able to do that for much longer.”

So they shifted their efforts, setting up six tabling events in the student union over a two-month period. They surveyed students about whether they’d benefit from menstrual products in the restrooms and which kind, while still handing out free products as needed.

They then took the results to the campus operations director, Megan Proctor Neff, and received permission to put dispensers in the Union’s restrooms, provided they had funding and were willing to keep them stocked.

The initiative is part of a series of efforts at NAU, according to Felsen and Kavanagh.

The Commission on the Status of Women at the University had been trying to bring period products on campus for the past two years, they said. The PERIOD. Club came to NAU in October, and its advisor, Ari Burford, connected them with Kavanagh, as well as Sanjam Ahluwalia and Wendy Wetzel, two of the co-chairs of the commission’s Menstrual Health and Solutions subcommittee.

“We all came together with the same goal of getting period products on campus for free,” Felsen said. “I think having student backing was really what it needed — showing the school that this is something students want and students need — to get them to provide that funding for us, because that’s the biggest obstacle.”

Kavanagh and Felsen said they hope to place dispensers in men’s restrooms and residence halls as well, and potentially expand to place baskets of free products in downtown Flagstaff restrooms. Their organizations, they added, are in the process of figuring out how to best go about this.

NAU’S PERIOD. Club is one of a set of similar organizations across the country, with the goal of educating people about periods and reducing poverty periods.

Future efforts the club is considering include outreach to local schools, and making donations to shelters and women’s homes. They recently donated 1,700 pads to Ukrainian refugees, for example.

NAU is not alone in these efforts, Kavanagh said. She had heard about similar initiatives at a conference she’d attended recently and was speaking to students at the other Arizona public universities.

“This isn’t just an Arizona or Flagstaff issue,” she said. “Across the country universities are talking about this.”

More about both clubs can be found on Instagram: PERIOD. Club is at period.flagstaff and the Women’s Health Committee is at whc_nau.