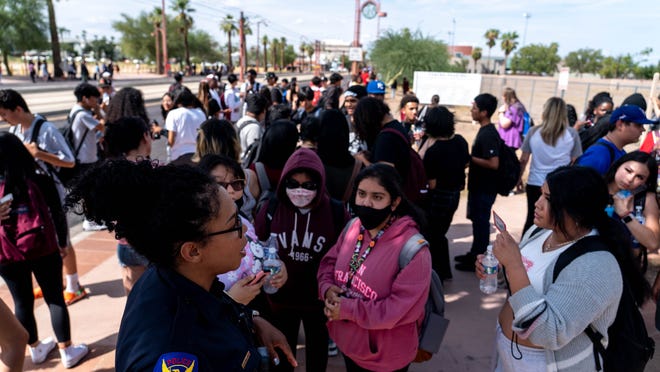 Detectives with the Phoenix Police Department say they have determined three students detained at Central High School following a lockdown were victims of an assault.

The suspect in the assault remains at large.

Xavier College Preparatory, Brophy College Preparatory and Phoenix Coding Academy were also locked down as a precaution, police said at about 12:40 pm Friday. The lockdown ended a little after 2:30 pm after officers found no gun or evidence that a shot was fired, police said, adding an investigation was ongoing as students were released. Phoenix police said they searched Central High School room by room.

The campus was cleared by 3:30 pm while Central Avenue was closed near the high school, between Indian School and Camelback roads. Police said once the lockdown ended, students were sent to Central and Glenrosa avenues to meet with parents.

An argument escalated into a fight, Assistant Police Chief Sean Connelly said during a news briefing. A child made the initial call about a potential shooting, according to Connelly. Multiple 911 calls from students and parents were made about the incident, Phoenix Union High School District Superintendent Chad Gestson said at a news briefing.

There was no assigned officer on campus, according to Connelly.

The district also said in a tweet that one person was transported by first responders during the lockdown due to heat-related stress. A couple of students were affected by the heat, while a third student had a hand injury, Gestson said.

So far, there has been no evidence that a firearm was used; however, detectives were still investigating the incident.

“After speaking with three students detained at Central High School, detectives were able to verify all three were victims of an assault,” Bower said. “The suspect is currently outstanding.”

Bower asked anyone with information regarding the incident to contact Silent Witness at 480-WITNESS or 480-TESTIGO for Spanish, where any tips will remain anonymous.