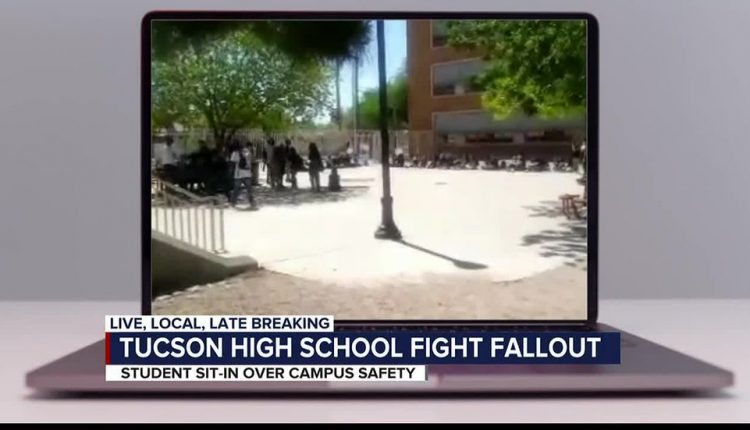 TUCSON, Ariz. (KOLD News 13) – Students protested this week’s large fight on campus that led to Tucson Police responding to the scene and a call by a Tucson Unified board member for a full investigation.

A large fight with fists flying took place in the outside courtyard in the middle of lunchtime.

Students swarmed around the melee, school safety officers moved in to control it, and Tucson Police were called in for help.

Tucson Police arrested a parent and a student in connection with this fight.

“It was pretty terrifying. I think as a student and as a parent, I would really be appalled as I’m sure the district is. It could be pretty traumatic for a lot of kids so I’m not surprised that there is a protest from the students,” TEA President Margaret Chaney said.

A flyer circulated with organizers calling for new protocols — no drama, no fights, no guns on campus.

The district said a small group of students staged a peaceful protest in the courtyard that lasted about 30 minutes.

“They’re developing a protocol to address these kinds of issues to address what happens to parents, how they’re escorted to and from, once they’re on campus. If there’s a situation where there’s a larger group of folks involved, determine the next steps,” Chaney said the district told her.

Board member Sadie Shaw sent KOLD a response saying “she’s concerned about the actions of both school safety officers and TPD”.

She is now calling for “a full investigation into the fight and an examination of district policies and protocols to make sure this never happens again”.

KOLD reached out to Tucson Police and a spokesperson said officers did not use pepper spray or pepper balls.

They didn’t use force or deploy the crowd control ammunition, a red bean bag shotgun, they had on hand.

The TPD spokesperson said they had used any of those things it would have been documented as a use of force report.

KOLD reached out to the district for a response. A spokesperson replied, “District administration is working diligently to make sure that all safety protocols are in place and will determine in the near future if any changes will be made. The district will disclose the details as soon as any changes are approved.”