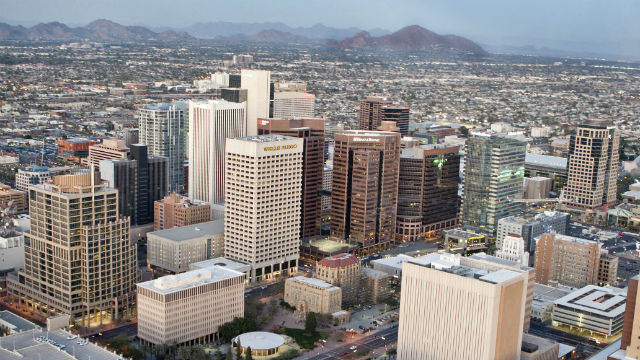 Downtown Phoenix and the Valley of the Sun. Courtesy of the city

A new study by WalletHub found inflation to be highest in Phoenix, lowest in Anchorage, and generally low for major California metropolitan areas.

“In 2022, Americans are dealing with sky-high inflation, which hit a 40-year high earlier this year,” said WalletHub. “Inflation is rising more quickly in some places than others, though.”

The study released Tuesday by the Washington, DC-based financial services website was based on the change in the Consumer Price Index over the past two months and the change over the past year for 23 metropolitan areas.

Metro areas where both figures were high topped the list, and illustrated how inflation is felt differently across the country.

Anchorage was at the bottom, with prices actually declining 4% over the past two months but sill up 7.6% for the year.

San Francisco ranked 22nd and Los Angeles 20th. Both major metropolitan areas experienced a slight decline in prices over the past two months.

WalletHub asked a number of university professors to comment on the reasons for inflation and the potential outcome.

“The two biggest factors driving inflation today are the supply chain problems caused by the coronavirus pandemic and the Russian invasion of the Ukraine,” said Robert R. Johnson, a business professor at Creighton University in Nebraska.

Milton Marquis, a professor emeritus at Florida State University, noted that “while in the throes of high inflation, it is sometimes forgotten that inflation is not a phenomenon forever.”

Authorities respond to ‘prank call’ about shooting at Tucson High