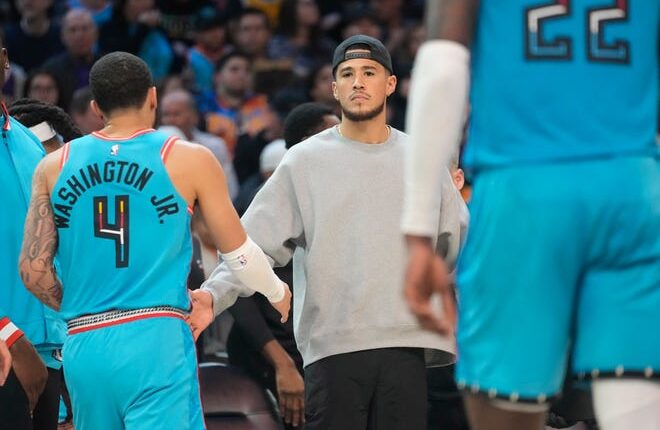 Phoenix Suns coach Monty Williams doesn’t have an exact date for Devin Booker’s re-evaluation of a left groin strain, but he didn’t suggest his All-Star guard will be ready to play anytime soon.

“We’ve got a lot of boxes to check before he can even approach that,” Williams said before Sunday’s game against the Grizzlies. “He’s had non-contact practices, but that’s not the same as getting beat up a little bit and playing in 3-on-3, 4-on-4, 5-on-5, playing in three-minute spurts, which is on average what you do in a game before there is a whistle. Between 2 ½ and three minutes, that’s where you build your conditioning, endurance to get back on the floor and play the way we play. He hasn’t done that yet.”

Booker strained his groin in the first quarter of Phoenix’s Christmas loss at Denver. The Suns sent out a release Dec. 28 that Booker would be re-evaluated in four weeks.

Based on that date, Booker could be evaluated Wednesday. The Suns (23-24) are 5-13 without Booker as he sat for Sunday’s game against Memphis (31-14). He first missed two games with left hamstring tightness.

Booker returned for two games as he scored a season-high 58 points in a Dec. 17 win over New Orleans. He sat the next three games with groin soreness before returning for the Christmas game at Denver.

Booker re-aggravated his groin within the first five minutes of that game and hasn’t played since. Missing his 14th consecutive game Sunday against Memphis, Booker has been getting up shots and showing better movement in the last few days in practice.

“We can’t even think about when he’s going to get back on the floor,” Williams continued. “He’s ready, but we just have to be careful.”

Williams didn’t have any update on Cameron Payne, who hasn’t played since suffering a right foot sprain Jan. 4 at Cleveland. He has missed eight consecutive games after missing nine with a right foot strain.

“There’s nothing even to report,” Williams said.

Paul returns, Suns hold on for 112-110 win over Grizzlies