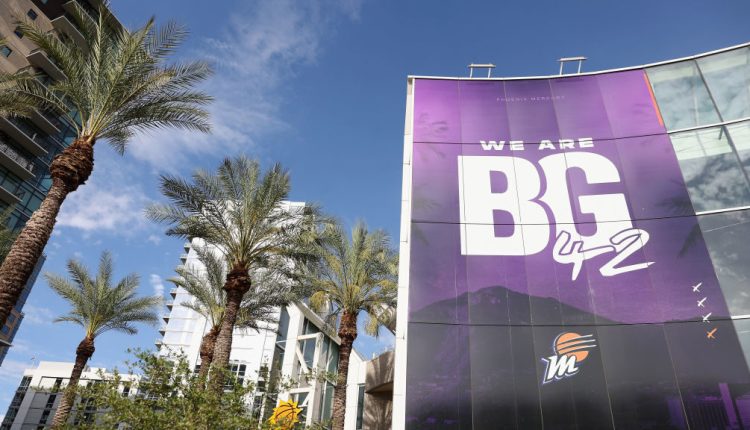 “We Are BG 42” is displayed on the exterior of Footprint Center before the WNBA game between the Phoenix Mercury and the Minnesota Lynx on June 21, 2022 in Phoenix, Arizona. Brittney Griner of the Phoenix Mercury was detained on February 17, at a Moscow-area airport after cannabis oil was allegedly found in her luggage. (Photo by Christian Petersen/Getty Images)

In honor of Brittney Griner’s 32nd birthday this past Tuesday, the Phoenix Suns and Mercury will move forward with their efforts in the community.

The teams announced that BG’s Heart & Sole Shoe Drive will continue at Footprint Center on Tuesday ahead of the Suns’ matchup with the Golden State Warriors.

Fans are welcomed and encouraged to bring new or gently used shoes to the arena to support the drive in Griner’s name. The doors open at 5 pm MST for PayPal SixthMan members and 5:30 pm for the general public.

Through the first four years of this mission, approximately 2,000 pairs of shoes were collected. However, this summer saw north of 3,200 pairs of shoes and $27,000 raised for the Phoenix Rescue Mission.

Griner began her shoe drive in 2016 upon seeing people unhoused and without shoes during the summer. As a result, she started driving around Phoenix with shoes in her trunk in case she saw somebody in need.

Since the Mercury drafted her in 2013, Griner has made an effort to support the local community. She joined Phoenix Rescue Mission’s “Hope Coach” and delivered shoes, as well as other resources, directly to people in need.

In 2017, Griner won the WNBA Cares Community Assist Award for her efforts in assisting those in need, as well as being a leader in the LGBTQ community.

Currently, she remains in Russia in custody on drug possession charges. She has an appeal hearing set for Tuesday after she was sentenced to nearly 10 years in prison.

Man arrested after Yuma home shot at; no injuries reported