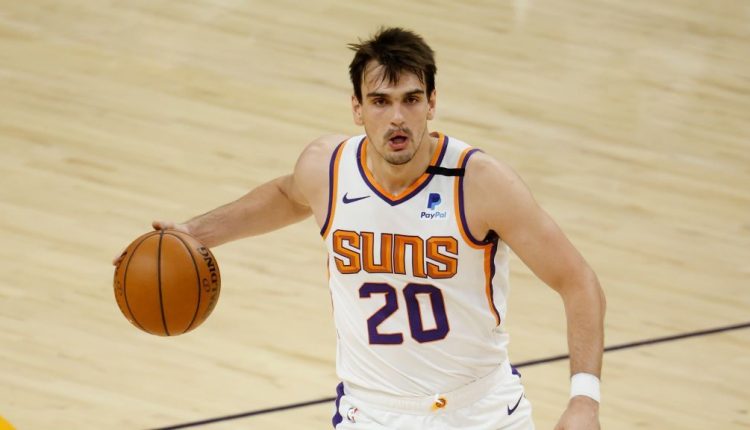 Dario Saric #20 of the Phoenix Suns handles the ball against the Atlanta Hawks during the NBA game at Phoenix Suns Arena on March 30, 2021 in Phoenix, Arizona. The Suns defeated the Hawks 117-110. (Photo by Christian Petersen/Getty Images)

Forward Dario Saric hasn’t played for the Phoenix Suns since injuring his knee in the 2021 NBA Finals.

He’s among a group of NBA players who missed last season altogether. And like many of those athletes, his role is up in the air as he hopes for a healthy 2022-23 season.

There’s a soft market for big men in today’s NBA. While Saric’s passing and shooting ability separate him some from the rest of the crowd, it remains to be seen if Phoenix will wait out his rehab process in hopes of getting him back in the mix with the departures of McGee, Kaminsky and Smith.

Saric, who is on an expiring contract, suffered a torn right ACL in Game 1 of the 2021 NBA Finals.

Well into rehabbing his torn ACL, Saric underwent a procedure to repair the meniscus in his right knee during the second round of this year’s playoffs in May.

Prior to the injury, Saric was a serviceable big man who found a fitting role for Phoenix.

He was a top-10 player NBA-wide in NET rating as the backup center before his role fell off for the playoff run. He played just 10.7 minutes per game before his knee injury.

In Saric’s absence since then, the Suns have cycled through JaVale McGee, Frank Kaminsky, Jalen Smith, Bismack Biyombo and Ish Wainright in a variety of backup center roles.

For his career, Saric averages 11.7 points, six rebounds and two assists per game while shooting 44% from the field.

Can the 2023 Honda CR-V Tackle the Hyundai Tucson?