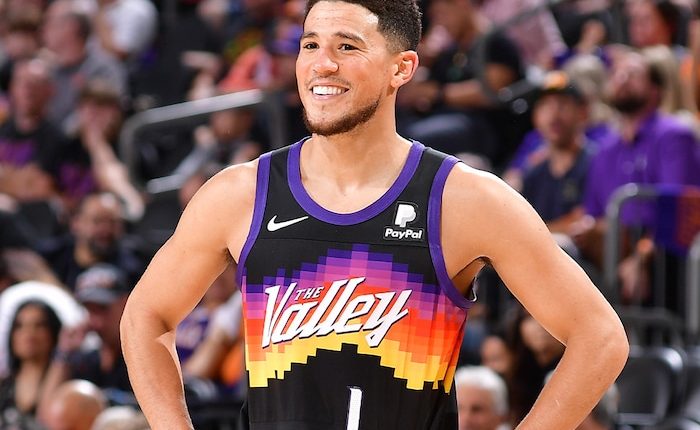 “Devin has had a truly special impact on our organization, our fanbase and the Valley community since he first arrived in Phoenix,” said Managing Partner Robert Sarver. “We are grateful for all his contributions and we are thrilled to ensure that he will remain in a Phoenix Suns uniform into the future.”

Booker was an All-NBA First Team selection this past season, averaging a career-high 26.8 points plus 5.0 rebounds, 4.8 assists and 1.1 steals to help the Suns win a franchise record 64 games. He finished fourth in voting for NBA MVP after leading the league in points per touch and shooting 56.9% from the field in clutch time. Booker was the only player in the NBA to average at least 2.5 field goals per game from each of the paint, the midrange and three-point distance in 2021-22.

“Devin, with his work ethic and commitment to excellence, has established himself as one of the league’s best players, elevating himself and our organization,” said General Manager James Jones. “We are beyond excited to extend the mutual commitment between Book, the Suns and the Phoenix community. He’s just getting started.”

During the 2021 playoffs, Booker totaled 601 points as the Suns advanced to the NBA Finals, establishing an NBA record for most points in a postseason debut and breaking the previous mark which had stood for over 50 years. A three-time NBA All-Star selection, he has totaled 11,217 points through seven career regular seasons since joining the Suns as the 13th overall pick in the 2015 NBA Draft, averaging 23.5 per game. This past March, the 25-year-old became the fourth-youngest player in NBA history to reach 11,000 career points. The Suns’ all-time leader in games of 30-plus, 40-plus and 50-plus points, Booker scored a franchise record 70 points in 2017 to become just the sixth player in NBA history to score at least 70 in a game.

In addition to his play on the court, Booker has made a significant impact on the Phoenix community throughout his time with the Suns. In 2019, he launched the Devin Booker Starting Five initiative, which pledged $2.5 million dollars over the course of five years to local community groups for their respective efforts to improve the lives of Arizona youth and families. Through the initiative, Booker donates $500,000 annually, giving grants of $100,000 to each of five different nonprofits that serve youth and family in Arizona. He won the 2020-21 Seasonlong NBA Cares Community Assist Award in recognition of his community outreach.

Booker shares the following message to the Valley community and Suns fans worldwide:

Phoenix,
Thank you for allowing me to grow. The love from this city has been there from the beginning. I’m honored and humbled to call this place HOME.